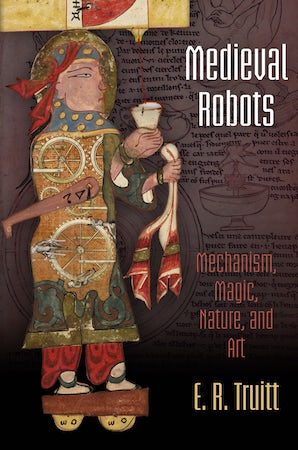 A thousand years before Isaac Asimov set down his Three Laws of Robotics, real and imagined automata appeared in European courts, liturgies, and literary texts. Medieval robots took such forms as talking statues, mechanical animals, and silent metal guardians; some served to entertain or instruct while others performed disciplinary or surveillance functions. Variously ascribed to artisanal genius, inexplicable cosmic forces, or demonic powers, these marvelous fabrications raised fundamental questions about knowledge, nature, and divine purpose in the Middle Ages.

Medieval Robots recovers the forgotten history of fantastical, aspirational, and terrifying machines that captivated Europe in imagination and reality between the ninth and fourteenth centuries. E. R. Truitt traces the different forms of self-moving or self-sustaining manufactured objects from their earliest appearances in the Latin West through centuries of mechanical and literary invention. Chronicled in romances and song as well as histories and encyclopedias, medieval automata were powerful cultural objects that probed the limits of natural philosophy, illuminated and challenged definitions of life and death, and epitomized the transformative and threatening potential of foreign knowledge and culture. This original and wide-ranging study reveals the convergence of science, technology, and imagination in medieval culture and demonstrates the striking similarities between medieval and modern robotic and cybernetic visions.

Medieval Robots is not only a remarkably evocative book, but it also breaks new ground by virtue of being the first survey of its kind in the English-speaking academic world, relocating our discussion of the legacy of ancient automata to novel chronological coordinates. It is reasonable to hope that Truitt's book will lead to a reconsideration of 'Abbasid patronage of science, magical hermetism, and the nexus of technology and ethnography, among many other themes, not to mention to our understanding of the Middle Ages itself. Reviews in History

Engagingly written and thoughtfully researched, Medieval Robots will be of value to specialists in the intellectual and literary history of the Middle Ages, as well as to more general readers. . . . Truitt's suggestive and nuanced account both firmly establishes the importance of medieval automata in the wider development of Western thought about the relationship of science, technology, and the imagination and opens the door to further research. American Historical Review

The first comprehensive work of scholarship on European automata of the Middle Ages, Medieval Robots systematically and chronologically works through themes such as the transition from the magical to the mechanical and the liminal status of robots between art and nature, familiar and foreign. Well researched and well written, the book does an excellent job of showing the wider cultural significance of automata within medieval history and the history of science. Pamela O. Long, author of Openness, Secrecy, Authorship: Technical Arts and the Culture of Knowledge from Antiquity to the Renaissance