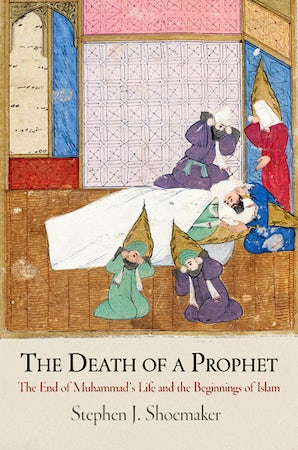 The Death of a Prophet

The End of Muhammad's Life and the Beginnings of Islam

The oldest Islamic biography of Muhammad, written in the mid-eighth century, relates that the prophet died at Medina in 632, while earlier and more numerous Jewish, Christian, Samaritan, and even Islamic sources indicate that Muhammad survived to lead the conquest of Palestine, beginning in 634-35. Although this discrepancy has been known for several decades, Stephen J. Shoemaker here writes the first systematic study of the various traditions.

Using methods and perspectives borrowed from biblical studies, Shoemaker concludes that these reports of Muhammad's leadership during the Palestinian invasion likely preserve an early Islamic tradition that was later revised to meet the needs of a changing Islamic self-identity. Muhammad and his followers appear to have expected the world to end in the immediate future, perhaps even in their own lifetimes, Shoemaker contends. When the eschatological Hour failed to arrive on schedule and continued to be deferred to an ever more distant point, the meaning of Muhammad's message and the faith that he established needed to be fundamentally rethought by his early followers.

The larger purpose of The Death of a Prophet exceeds the mere possibility of adjusting the date of Muhammad's death by a few years; far more important to Shoemaker are questions about the manner in which Islamic origins should be studied. The difference in the early sources affords an important opening through which to explore the nature of primitive Islam more broadly. Arguing for greater methodological unity between the study of Christian and Islamic origins, Shoemaker emphasizes the potential value of non-Islamic sources for reconstructing the history of formative Islam.

Introduction
Chapter 1. "A Prophet Has Appeared, Coming with the Saracens": Muhammad's Leadership during the Conquest of Palestine According to Seventh- and Eighth-Century Sources
Chapter 2. The End of Muhammad's Life in Early Islamic Memory: The Witness of the Sira Tradition
Chapter 3. The Beginnings of Islam and the End of Days: Muhammad as Eschatological Prophet
Chapter 4. From Believers to Muslims, from Jerusalem to the Hijaz: Confessional Identity and Sacred Geography in Early Islam
Conclusion: Jesus and Muhammad, the Apostle and the Apostles

[Shoemaker] develops [previous ideas] substantially, discusses them in the light of recent publications, and also offers highly instructive parallels with the situation in (and scholarship on) early Christianity. . . . [He] has done a very good job of highlighting the issues and giving them sophisticated and thorough discussion, and [The Death of a Prophet] is a worthwhile addition to the fast-expanding body of material on Islamic origins. Journal of the American Oriental Society

A work of utmost importance, and one that has profound implications for our understanding of how Islam began. Fred Donner, University of Chicago