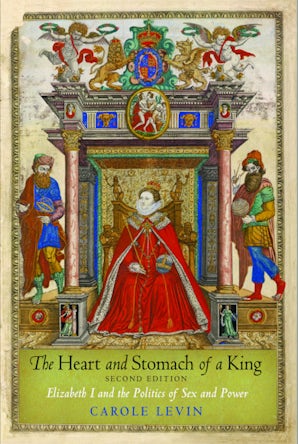 The Heart and Stomach of a King

Elizabeth I and the Politics of Sex and Power

In her famous speech to rouse the English troops staking out Tilbury at the mouth of the Thames during the Spanish Armada's campaign, Queen Elizabeth I is said to have proclaimed, "I may have the body of a weak and feeble woman, but I have the heart and stomach of a king." Whether or not the transcription is accurate, the persistent attribution of this provocative statement to England's most studied and celebrated queen illustrates some of the contradictions and cultural anxieties that dominated the collective consciousness of England during a reign that lasted from 1558 until 1603.

In The Heart and Stomach of a King, Carole Levin explores the myriad ways the unmarried, childless Elizabeth represented herself and the ways members of her court, foreign ambassadors, and subjects represented and responded to her as a public figure. In particular, Levin interrogates the gender constructions, role expectations, and beliefs about sexuality that influenced her public persona and the way she was perceived as a female Protestant ruler. With a new introduction that situates the book within the emerging genre of cultural biography, the second edition of The Heart and Stomach of a King offers insight into the continued fascination with Elizabeth I and her reign.

Levin breaks out of the usual stale biographical packaging of Elizabeth by using traditional sources in imaginative ways, as well as by incorporating a number of less usual texts. Shakespeare Quarterly