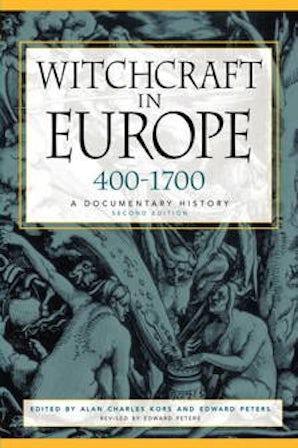 Selected by Choice magazine as an Outstanding Academic Book for 2001

The highly-acclaimed first edition of this book chronicled the rise and fall of witchcraft in Europe between the twelfth and the end of the seventeenth centuries. Now greatly expanded, the classic anthology of contemporary texts reexamines the phenomenon of witchcraft, taking into account the remarkable scholarship since the book's publication almost thirty years ago.

Spanning the period from 400 to 1700, the second edition of Witchcraft in Europe assembles nearly twice as many primary documents as the first, many newly translated, along with new illustrations that trace the development of witch-beliefs from late Mediterranean antiquity through the Enlightenment. Trial records, inquisitors' reports, eyewitness statements, and witches' confessions, along with striking contemporary illustrations depicting the career of the Devil and his works, testify to the hundreds of years of terror that enslaved an entire continent.

Thomas Aquinas, Martin Luther, Thomas Hobbes, and other thinkers are quoted at length in order to determine the intellectual, perceptual, and legal processes by which "folklore" was transformed into systematic demonology and persecution. Together with explanatory notes, introductory essays—which have been revised to reflect current research—and a new bibliography, the documents gathered in Witchcraft in Europe vividly illumine the dark side of the European mind.

Revisions have made this anthology stronger and even more essential. Choice

Comprehensive, original, scholarly, philosophically searching, and meticulously prepared. . . . The volume, copiously illustrated, reveals the shocking impact of the belief in witches on Europe's Middle Ages, and examines the struggles of thinkers . . . to confront the phenomenon on rational terms. This is a major work in the genre. Publishers Weekly, in a review of the first edition

An indispensable source book. Choice, in a review of the first edition