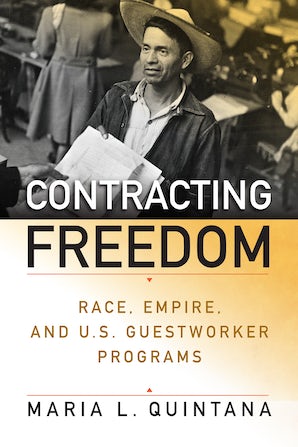 Contracting Freedom is the first relational study of the origins of twentieth-century U.S. guestworker programs from Mexico and the Caribbean, focusing on their shared origins. It investigates these government-sponsored programs as the unexplored consequence of the history of enslaved labor, Japanese American incarceration, the New Deal, the long civil rights movement, and Caribbean decolonization.

In the World War II era, U.S. lawmakers and activists alike celebrated guestworker agreements with Mexico and the Caribbean as hallmarks of anti-imperialism and worker freedom. A New Deal-based conception of racial liberalism inspired many of these government officials and labor advocates to demand a turn toward state-sponsored labor contracts across the hemisphere to protect migrant workers' welfare and treatment in the postwar world. Their view of liberalism emphasized the value of formal labor contracts, bilateral agreements between nation-states, state power, and equal rights, all of which they described as advances beyond older labor arrangements forged under colonialism and slavery. Eighty years later, their conceptions of guestworker programs continue to shape political understandings of the immigration debate, as these programs are often considered a solution to offset the deportation regime, and as a response to increasingly rigid racist measures to close U.S. borders to migrants.

Maria Quintana's compelling history shifts the focus on guestworker programs to the arena of political conflict, revealing how fierce debates over the bracero program and Caribbean contract labor programs extended and legitimated U.S. racial and imperial domination into the present era. It also unearths contract workers' emerging visions of social justice that challenged this reproduction of race and empire, giving freedom new meanings that must be contemplated.

"Contracting Freedom is a must-read for scholars of migration, race, labor, and empire. It supplies a richly researched and highly impressive account of the various guestworker programs that emerged in the United States during the mid-twentieth century. The book brilliantly illustrates how policymakers reinvented the labor contract to justify the employment of Mexican immigrants, Japanese American internees, Puerto Ricans, and British West Indians. The contract not only tendered high wages and steady work but also promised the transformation of race relations in the United States, the demise of the nation’s imperialist exploits, and the creation of robust farm labor unions. The guestworker contract, in short, would reflect the triumphs of liberal state governance. Yet, instead, as Quintana poignantly reveals, guestworker programs exposed the enduring influence of settler colonial, racial capitalist, and anti-democratic impulses in the development of the mid-century American state."—S. Deborah Kang, author of The INS on the Line: Making Immigration Law on the U.S.–Mexico Border, 1917–1954

"During the middle of the twentieth century, liberals in the United States and beyond envisioned guestworker programs as a means to combat racism and provide economic freedom. Maria L. Quintana convincingly shows that, in reality, these bilateral agreements served as catalysts for state-sanctioned coercion, exploitation, and violence. Original and ambitious, this book reveals how the intertwined histories of U.S. imperialism and New Deal liberalism shaped World War II–era contract labor programs and the lives of Mexicans, Japanese Americans, Puerto Ricans, and British West Indians."—Adam Goodman, author of The Deportation Machine: America’s Long History of Expelling Immigrants