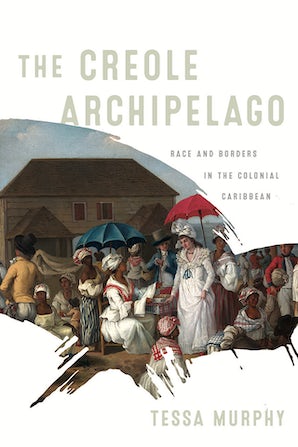 Race and Borders in the Colonial Caribbean

In The Creole Archipelago, Tessa Murphy traces how generations of Indigenous Kalinagos, free and enslaved Africans, and settlers from a variety of European nations used maritime routes to forge social, economic, and informal political connections that spanned the eastern Caribbean. Focusing on a chain of volcanic islands, each one visible from the next, whose societies developed outside the sphere of European rule until the end of the Seven Years' War in 1763, Murphy argues that the imperial frameworks typically used to analyze the early colonial Caribbean are at odds with the geographic realities that shaped daily life in the region.

Through use of wide-ranging sources including historical maps, parish records, an Indigenous-language dictionary, and colonial correspondence housed in the Caribbean, France, England, and the United States, Murphy shows how this watery borderland became a center of broader imperial experimentation, contestation, and reform. British and French officials dispatched to Dominica, Grenada, St. Lucia, St. Vincent, and Tobago after 1763 encountered a creolized society that repeatedly frustrated their attempts to transform the islands into productive plantation colonies. By centering the stories of Kalinagos who asserted continued claims to land, French Catholics who demanded the privileges of British subjects, and free people of African descent who insisted on their right to own land and enslaved people, Murphy offers a vivid counterpoint to larger Caribbean plantation societies like Jamaica and Barbados.

By looking outward from the eastern Caribbean chain, The Creole Archipelago resituates small islands as microcosms of broader historical processes central to understanding early American and Atlantic history, including European usurpation of Indigenous lands, the rise of slavery and plantation production, and the creation and codification of racial difference.

Introduction. Islands Beyond Empires
Chapter 1. Kalinago Dominion and the Shape of the Eastern Caribbean
Chapter 2. Creating the Creole Archipelago
Chapter 3. Colonizing the Caribbean Frontier
Chapter 4. Seeking a Place as Colonial Subjects
Chapter 5. Surviving the Turn to Sugar
Chapter 6. An Empire Disordered
Chapter 7. Revolutions and the End of Accommodation
Conclusion. Echoes of the Creole Archipelago
List of Abbreviations
Notes
Index
Acknowledgments

Remarkable...Murphy has found, in one ofthemosttrafficked(byshipsandhistorians alike) corners of the Americas, what feels like a new world. Through her active reframing of space in the eastern Caribbean, and by paying attention to Indigenous geographies and interimperial borderlands, Murphy has written a timely and important study...For historians of the Caribbean of any period,
The Creole Archipelagowill be a must-read.

"Essential...This well-researched account, which thoughtfully includes transatlantic archival work, posits a new way of thinking about the archipelago linked by travel, settlement, race, and culture. This truly insightful study adds to a number of historical fields and is a must-read for those interested in colonial, regional, or Caribbean history."—Choice

"The transimperial and multiracial historical geographies of the seventeenth- and eighteenth-century Lesser Antilles come to life in page after page of this exquisitely crafted and richly researched study. The Creole Archipelago places the eastern Caribbean’s Indigenous people, enslaved Africans and Afro-creoles, free people of color, and French and British colonists at the center of epic hemispheric struggles over enslavement, freedom, and the plantation complex."—Melanie Newton, University of Toronto

"In this exceptionally rich and persuasive book, Tessa Murphy transforms our understanding of the early modern Caribbean. Murphy looks beyond the major sugar islands and uncovers a complex social world connecting Tobago, Grenada, St. Vincent, St. Lucia, and Dominica. Linked by Indigenous travel and settlement centuries before Europeans arrived, these islands remained entwined throughout the eighteenth century as they became home to thousands of rogue settlers of European and African descent. Shaped by persistent Kalinago influence, and existing on the margins of competing European empires, Murphy’s ‘Creole Archipelago’ reveals both the limits and the destructive influence of colonialism."—Brett Rushforth, University of Oregon