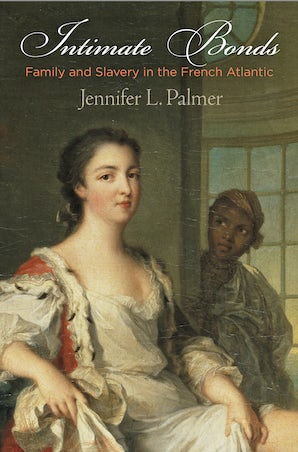 Family and Slavery in the French Atlantic

Following the stories of families who built their lives and fortunes across the Atlantic Ocean, Intimate Bonds explores how households anchored the French empire and shaped the meanings of race, slavery, and gender in the early modern period. As race-based slavery became entrenched in French laws, all household members in the French Atlantic world —regardless of their status, gender, or race—negotiated increasingly stratified legal understandings of race and gender.

Through her focus on household relationships, Jennifer L. Palmer reveals how intimacy not only led to the seemingly immutable hierarchies of the plantation system but also caused these hierarchies to collapse even before the age of Atlantic revolutions. Placing families at the center of the French Atlantic world, Palmer uses the concept of intimacy to illustrate how race, gender, and the law intersected to form a new worldview. Through analysis of personal, mercantile, and legal relationships, Intimate Bonds demonstrates that even in an era of intensifying racial stratification, slave owners and slaves, whites and people of color, men and women all adapted creatively to growing barriers, thus challenging the emerging paradigm of the nuclear family. This engagingly written history reveals that personal choices and family strategies shaped larger cultural and legal shifts in the meanings of race, slavery, family, patriarchy, and colonialism itself.

"Intimate Bonds illuminates how slaves and free people of color challenged the hardening racial and social hierarchies of the eighteenth century. . . . The well-crafted blend of deep archival research and insightful prose makes Intimate Bonds a terrific addition to seminars on race, colonialism, and gender, as well as the Atlantic World, early America, early Latin America, and France."—Journal of Social History

"A striking and original study that will engage both scholars and students in its vivid exploration of families and people in eighteenth-century Atlantic France. Extensive and detailed archival research undergirds each narrative gem. The prose is simple and lively, hiding the author's hard work of empirically verifying familial and historical connections."—Sue Peabody, Washington State University

"Intimate Bonds is a deeply-researched book that offers an important intervention in the fields of early modern French and French Atlantic history. Analyzing a broader range of actors than previous historians, Jennifer L. Palmer sheds important new light on the contested, constructed, and shifting meanings of 'race' in the French Atlantic world."—Brett Rushforth, University of Oregon