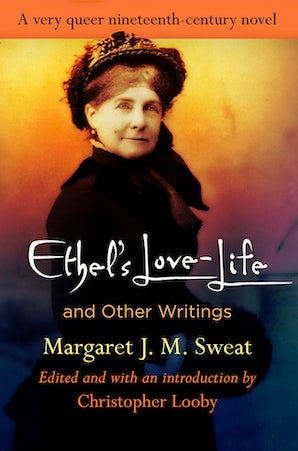 "Ethel's Love-Life" and Other Writings

In a series of lengthy letters, the unsettled and unruly Ethel Sutherland writes to an initially unnamed and ungendered correspondent, and patiently discloses the troubled history of her past romantic attachments to both men and women. Not until the third letter does she reveal that her correspondent is Ernest, the man to whom she is engaged to be married. Wanting to make him understand how all of her past loves are included and sublimated in her love for him, she especially wants to explain how "women often love each other with as much fervor and excitement as they do men"; and although this love is curiously "freed from all the grosser elements of passion, as it exists between sexes," nevertheless it "retains its energy, its abandonment, its flush, its eagerness, its palpitation, and its rapture."

Margaret Jane Mussey Sweat (1823-1908), a native of Portland, Maine, and wife of a United States congressman, published Ethel's Love-Life in 1859. The book is sometimes credited as an early—even the first—"lesbian" American novel, but such a label, Christopher Looby observes in his Introduction, somewhat misrepresents what is distinctive and surprising about the book. Ethel's Love-Life confounds our received binary distinctions between the spiritual and the carnal and, indeed, between the sexual and the nonsexual—the boundaries between such categories being not nearly as well-policed at the time as they later became. It is here reprinted, along with Sweat's Verses (1890) and five of her published essays, on Charlotte Brontë, George Sand, the contemporary novel, and the friendships of women.

"The whole of Sweat’s oeuvre is framed by Looby’s erudite yet accessible introduction...His notes to Sweat’s work are extensive and characteristically rigorous, glossing her complex allusions to classical and canonical literature and art, Scripture, philosophy, mesmerism, Transcendental writing, fellow female writers of her period, then-current and historical events, and her own life. The result is an omnibus introduction to this singular yet also representative queer female author, suitable for the educated layperson, undergraduates, and advanced scholars, opening up many directions to move forward."—American Literary History