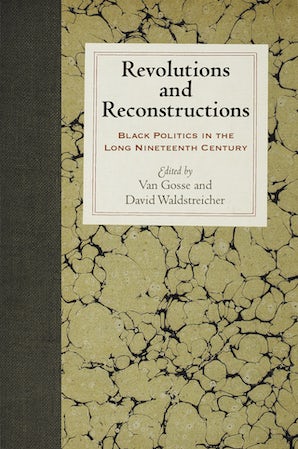 Revolutions and Reconstructions gathers historians of the early republic, the Civil War era, and African American and political history to consider not whether black people participated in the politics of the nineteenth century but how, when, and with what lasting effects. Collectively, its authors insist that historians go beyond questioning how revolutionary the American Revolution was, or whether Reconstruction failed, and focus, instead, on how political change initiated by African Americans and their allies constituted the rule in nineteenth-century American politics, not occasional and cataclysmic exceptions.

The essays in this groundbreaking collection cover the full range of political activity by black northerners after the Revolution, from cultural politics to widespread voting, within a political system shaped by the rising power of slaveholders. Conceptualizing a new black politics, contributors observe, requires reorienting American politics away from black/white and North/South polarities and toward a new focus on migration and local or state structures. Other essays focus on the middle decades of the nineteenth century and demonstrate that free black politics, not merely the politics of slavery, was a disruptive and consequential force in American political development.

From the perspective of the contributors to this volume, formal black politics did not begin in 1865, or with agitation by abolitionists like Frederick Douglass in the 1840s, but rather in the Revolutionary era's antislavery and citizenship activism. As these essays show, revolution, emancipation, and Reconstruction are not separate eras in U.S. history, but rather linked and ongoing processes that began in the 1770s and continued through the nineteenth century.

Introduction. Black Politics and U.S. Politics in the Age of Revolutions, Reconstructions, and Emancipations
Van Gosse and David Waldstreicher

Chapter 3. In the Woodpile: Negro Electors in the First Reconstruction
Van Gosse

Chapter 4. Freedom and the Politics of Migration After the American Revolution
Samantha Seeley

Chapter 7. "Agitation, Tumult, Violence Will Not Cease": Black Politics and the Compromise of 1850
Andrew Diemer

"Gosse and Waldstreicher have assembled a well-organized and carefully edited collection. The editors and the authors have thoughtfully merged the unique historical research and analysis of each author with the volume’s larger arguments about nineteenth-century Black people’s political engagement. Their collection is only a preview of a developing body of work that will surely transform scholarly understandings of the evolution of US politics."—Early American Literature

"[This] rich collection of essays brings together scholars of the Early Republic, the Civil War era, and African American life to reconceptualize Black political activism in the period between the Revolutionary and Reconstruction eras. Arguing that revolution, emancipation, and Reconstruction were interrelated processes, the editors open up a new vista through which historians will analyze these historical periods and Black political resistance."—The Journal of the Civil War Era

"Revolutions and Reconstructions brilliantly reimagines the black political landscape before 1900. Each chapter is based on cutting edge work and the whole volume convincingly shows how African American political actors, whether at the local or national level, played pivotal roles on a number of civic and institutional fronts. It's an essential volume."—Richard Newman, Rochester Institute of Technology

"This timely volume highlights the agency of African Americans by demonstrating that their efforts were ongoing, multifaceted, and driving American politics. The image of a nation going through a postwar reconstruction that was similar across regions has long been in need of correction, and this book is a significant contribution to that effort."—Beverly Tomek, University of Houston-Victoria