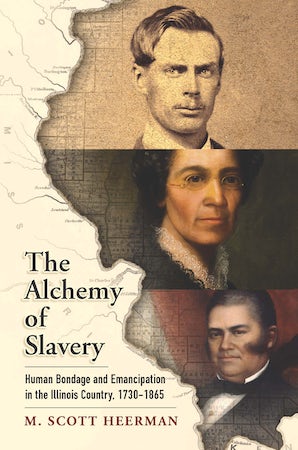 The Alchemy of Slavery

Human Bondage and Emancipation in the Illinois Country, 1730-1865

In this sweeping saga that spans empires, peoples, and nations, M. Scott Heerman chronicles the long history of slavery in the heart of the continent and traces its many iterations through law and social practice. Arguing that slavery had no fixed institutional form, Heerman traces practices of slavery through indigenous, French, and finally U.S. systems of captivity, inheritable slavery, lifelong indentureship, and the kidnapping of free people. By connecting the history of indigenous bondage to that of slavery and emancipation in the Atlantic world, Heerman shows how French, Spanish, and Native North American practices shaped the history of slavery in the United States.

The Alchemy of Slavery foregrounds the diverse and adaptable slaving practices that masters deployed to build a slave economy in the Upper Mississippi River Valley, attempting to outmaneuver their antislavery opponents. In time, a formidable cast of lawyers and antislavery activists set their sights on ending slavery in Illinois. Abraham Lincoln, Lyman Trumbull, Richard Yates, and many other future leaders of the Republican party partnered with African Americans to wage an extended campaign against slavery in the region. Across a century and a half, slavery's nearly perpetual reinvention takes center stage: masters turning Indian captives into slaves, slaves into servants, former slaves into kidnapping victims; and enslaved people turning themselves into free men and women.

"For a book so ambitious in scope, The Alchemy of Slavery delivers its punch in a slim volume."—Journal of American History

"The Alchemy of Slavery announces a new moment in grounding studies of the interpenetrations of slavery with settler colonialism."—Journal of the Civil War Era

"This is the most thorough account we have on slavery in Illinois and should be the standard for some time to come."—Journal of the Early Republic

"The Alchemy of Slavery stands as a great addition to both Midwestern and Illinois historiography."—Cleveland Review of Books

"M. Scott Heerman provocatively muddies the waters, demonstrating how slavery survived in 'free' Illinois all the way through the Civil War. His reinterpretation does much to link the history of Middle America to the global history of slavery."—Christina Snyder, Penn State University

"M. Scott Heerman offers much-needed and close scrutiny of the Illinois Country, a region that, because it straddled empires, labor systems, freedom, and slavery, opens up new understandings along a number of fronts, not least of which is the relationship between slavery's many iterations and the kind of freedoms those slaveries engendered. This book joins a growing body of scholarship that considers slavery and its legacies to be a national (versus a southern) problem, and which illuminates slavery as a historical process as opposed to a static and singular institution."—Susan Eva O'Donovan, University of Memphis

"Ambitious and meticulously researched, The Alchemy of Slavery illuminates the complex development of slavery and freedom in Illinois over more than a century. Heerman demonstrates the significance of local practices without neglecting broader developments in the French and British empires and in Washington, D.C. This book is wonderfully attentive to questions of geography and scale and makes a significant contribution to our understanding of colonial and early national North America."—Kate Masur, Northwestern University