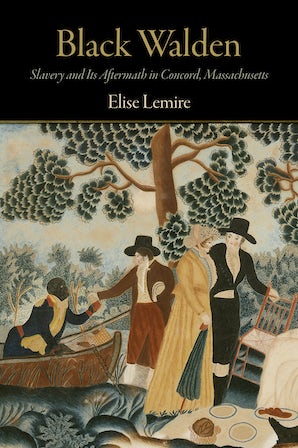 Slavery and Its Aftermath in Concord, Massachusetts

Concord, Massachusetts, has long been heralded as the birthplace of American liberty and American letters. It was here that the first military engagement of the Revolutionary War was fought and here that Thoreau came to "live deliberately" on the shores of Walden Pond. Between the Revolution and the settlement of the little cabin with the bean rows, however, Walden Woods was home to several generations of freed slaves and their children. Living on the fringes of society, they attempted to pursue lives of freedom, promised by the rhetoric of the Revolution, and yet withheld by the practice of racism. Thoreau was all but alone in his attempt "to conjure up the former occupants of these woods." Other than the chapter he devoted to them in Walden, the history of slavery in Concord has been all but forgotten.

In Black Walden: Slavery and Its Aftermath in Concord, Massachusetts, Elise Lemire brings to life the former slaves of Walden Woods and the men and women who held them in bondage during the eighteenth century. After charting the rise of Concord slaveholder John Cuming, Black Walden follows the struggles of Cuming's slave, Brister, as he attempts to build a life for himself after thirty-five years of enslavement. Brister Freeman, as he came to call himself, and other of the town's slaves were able to leverage the political tensions that fueled the American Revolution and force their owners into relinquishing them. Once emancipated, however, the former slaves were permitted to squat on only the most remote and infertile places. Walden Woods was one of them. Here, Freeman and his neighbors farmed, spun linen, made baskets, told fortunes, and otherwise tried to survive in spite of poverty and harassment.

With a new preface that reflects on community developments since the hardcover's publication, Black Walden reminds us that this was a black space before it was an internationally known green space and preserves the legacy of the people who strove against all odds to overcome slavery and segregation.

"Lemire has put together an engrossing portrait of slaveholders and the freed people in Concord."—Journal of African American History

"Lemire has unearthed an astonishing amount of detailed information about more than a dozen African and African American slaves and the interconnected white families who built their fortunes and genteel reputations on their backs. . . . A beautifully written, fascinating, and challenging piece of historical detective work."—Joanne Pope Melish, Journal of the Civil War Era

"Lemire has genuinely enriched our understanding not only of the history of Concord but also of the country for which that fabled town still so often stands."—New England Quarterly

"Breathtaking. . . . Lemire's meticulous and inspired archival research shows that 'Concord, Massachusetts, of all places, was a slave town.' . . . Imaginative and moral generosity, to both the black and the white eighteenth and early nineteenth century Concordians whose intimately entangled fortunes she chronicles, is a hallmark of her study. At the same time, Lemire is clear-eyed and clear-voiced about the facts and meanings of inter-racial Concord's 'long and brutal history.'"—American Literary History

"Elise Lemire has written an elegantly researched, deeply insightful, and eminently readable history of the embattled black families in New England's most celebrated town from the Revolutionary era to the heyday of the Transcendentalists. It is certain to be of the greatest interest not only to scholars across the entire interdiscipline of American studies but also to any and all readers interested in the tangled history of race in America."—Lawrence Buell, author of New England Literary Culture

"Thanks to Lemire's ingenious research, such valiant figures as Brister Freeman and Cato Ingraham can claim their just place alongside the more famous Minutemen in the town that fired the 'shot heard 'round the world.'"—Robert Gross, author of The Minutemen and Their World

"Walden Pond in Concord, Massachusetts, is most famous as the place where Henry David Thoreau went to 'live deliberately' and subsist on the land. Lemire . . . sets about to resurrect the memory of not only the freedmen and -women who dwelled there but also the history of slavery in Concord. . . . Ultimately, Lemire conveys the idea that before Walden Pond was a 'green space,' it was, in fact, a 'black space.'"—Library Journal

"This small but important study shines light on Africans in Massachusetts as both slaves and freeman. . . . The life of Concord's Africans in and out of slavery was one of prejudice, submission, abandonment, poverty, and absence of earthily rewards. . . . Essential."—Choice