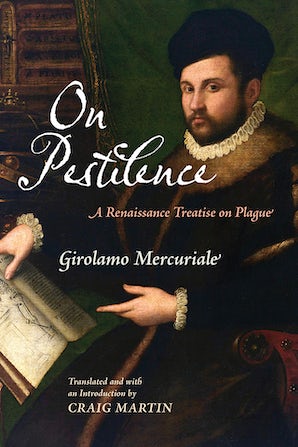 A Renaissance Treatise on Plague

In the spring of 1576, the Health Office of Venice, fearful of a growing outbreak of plague, imposed a quarantine upon the city. The move was controversial, with some in power questioning the precise nature of the disease and concerned about the economic and political impact of the closure. A tribunal of physicians was summoned by the Doge, among them Girolamo Mercuriale, professor of medicine in nearby Padua and perhaps the most famous physician in all of Europe. Whatever the disease was that was affecting Venice, Mercuriale opined, it was not and could not be plague, for it was neither fast-moving nor widespread enough for that diagnosis. Following Mercuriale's advice and against the objections of the Health Office of the Republic, the quarantine was lifted. The rejoicing of the Venetian populace was short-lived. By July 1577, when the outbreak had run its course, the plague had killed an estimated 50,000 Venetians, or approximately a third of the city's population.

In January 1577, in the midst of a plague he now recognized he had misdiagnosed, Mercuriale offered a series of lectures from his seat in Padua. Published under the title On Pestilence, the work surveyed past epidemics, including the Justinianic Plague of the sixth century and the Black Death of the fourteenth, and accounts of plague in Hippocrates, Galen, Avicenna, and other sources. Plague, Mercuriale pronounced, was characterized by its lethal nature and the rapidity with which it spread. He contended it was primarily airborne and was not caught through microbial transmission, but because the air itself became pestiferous and promoted putrefaction. Using his observations, he evaluated recently developed theories of contagion and concluded that pestiferous vapors could also emanate from the diseased bodies of its victims, and that one might also contract the disease from the contaminated clothing or bedding of the ill.

In Craig Martin's translation, On Pestilence appears for the first time in English, accompanied by an introduction that places the work within the context of sixteenth-century Italy, the history of medicine, and our own responses to epidemic disease.

"[T]his newly translated and annotated edition comes from a scholar eminently qualified to confront the difficult task of rendering into modern, readable English an early modern Latin text, especially one extremely technical in nature...Martin’s edition has all the virtues that one would hope to find in a translated primary source, worthy of both classroom use and scholarly research; namely, an utterly readable and accurate English prose, a well-informed introduction presenting the text from multiple perspectives, a sufficient number of succinct footnotes, a glossary of specialized or arcane terms, and an extensive bibliography of primary and secondary sources."—Renaissance and Reformation

"Craig Martin’s excellent and accessible translation (which includes a valuable glossary defining key medical terms) has certainly enriched our ability to teach plague. [There is] no better decision during COVID than to put one’s scholarly abilities to use and expand our understanding of how medicine struggled to understand disease and pandemic in the past."—Annals of Science

"Girolamo Mercuriale misdiagnosed plague for the Venetian government and then went on to develop a novel, robust account of the disease to which different kinds of responses and treatments could be brought. Craig Martin's translation of Mercuriale's On Pestilence will appeal to scholars and students of history, history of medicine and science, literature, and anyone looking to capture the steps and missteps in epidemiological history and to take the long view of epidemics-both would seem essential for understanding our current encounters with COVID."—Cynthia Klestinec, Miami University

"Craig Martin's translation of On Pestilence is the most accessible first-hand account of Renaissance medical theory and practice with respect to plague that I know."—Lisa Rosner, Stockton University