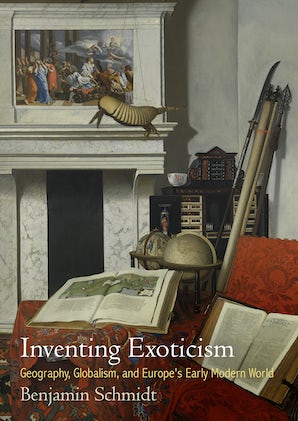 As early modern Europe launched its multiple projects of global empire, it simultaneously embarked on an ambitious program of describing and picturing the world. The shapes and meanings of the extraordinary global images that emerged from this process form the subject of this highly original and richly textured study of cultural geography. Inventing Exoticism draws on a vast range of sources from history, literature, science, and art to describe the energetic and sustained international engagements that gave birth to our modern conceptions of exoticism and globalism.

Illustrated with more than two hundred images of engravings, paintings, ceramics, and more, Inventing Exoticism shows, in vivid example and persuasive detail, how Europeans came to see and understand the world at an especially critical juncture of imperial imagination. At the turn to the eighteenth century, European markets were flooded by books and artifacts that described or otherwise evoked non-European realms: histories and ethnographies of overseas kingdoms, travel narratives and decorative maps, lavishly produced tomes illustrating foreign flora and fauna, and numerous decorative objects in the styles of distant cultures. Inventing Exoticism meticulously analyzes these, while further identifying the particular role of the Dutch—"Carryers of the World," as Defoe famously called them—in the business of exotica. The form of early modern exoticism that sold so well, as this book shows, originated not with expansion-minded imperialists of London and Paris, but in the canny ateliers of Holland. By scrutinizing these materials from the perspectives of both producers and consumers—and paying close attention to processes of cultural mediation—Inventing Exoticism interrogates traditional postcolonial theories of knowledge and power. It proposes a wholly revisionist understanding of geography in a pivotal age of expansion and offers a crucial historical perspective on our own global culture as it engages in a media-saturated world.

Introduction. On the Invention of Exoticism and the Invention of Europe
Chapter 1. Printing the World: Processed Books and Exotic Stereotypes
Chapter 2. Seeing the World: Visuality and Exoticism
Chapter 3. Exotic Bodies: Sex and Violence Abroad
Chapter 4. Exotic Pleasures: Geography, Material Arts, and the "Agreeable" World
Epilogue. From Promiscuous Assemblage to Order and Method: Europe and Its Exotic Worlds

"In its originality as a thesis, in its elegance of phrasing and conception, and in the erudition it embodies, Schmidt's work serves as a profound investigation of its subject matter. . . . Anyone who wants to understand how our early modern forebears saw the world may expect to find pleasure and instruction herein."—Times Higher Education Supplement

"[E]legantly written and beautifully produced . . . Inventing Exoticism is an inventive and perceptive book. It lucidly combines detailed analysis of specific texts and objects with discussion of larger themes invaluable for any reader interested in early modern European identities and perceptions. Crucially too, with his thorough accounts of particular objects and their wider intellectual implications, Schmidt provides an important historiographical service in showing how concepts and materiality can intersect."—Journal of Global History

"Much like the books it studies, Inventing Exoticism is beautifully produced . . . it is also extremely well-written . . . Schmidt takes his readers on an impressive tour de force through seven decades of (mostly Dutch-made) exotic iconography as it appeared in books, atlases, paintings, porcelain, tapestries, cabinets, and other media. Schmidt's effortless interweaving of book history, art history, and the history of global encounters will enhance the book's wide appeal."—Itinerario

"Benjamin Schmidt has written a remarkable and remarkably innovative account of a remarkable phenomenon. Inventing Exoticism is a very substantial contribution to the study of the cultural history of early modern perceptions of the non-European world, to the history of the book, and to the history of the economics and the sociology of the flow of information. It shows for the first time just how instrumental the concern with the exotic was in the creation of the modern image of Europe and of Europe's place in an increasingly global world."—Anthony Pagden, University of California, Los Angeles

"A fascinating and brilliantly resourceful study of early modern Dutch geography. In energetic and readable prose, Inventing Exoticism marshals a wealth of carefully indexed details around big picture questions about how we see other regions and peoples."—Mary C. Fuller, Massachusetts Institute of Technology