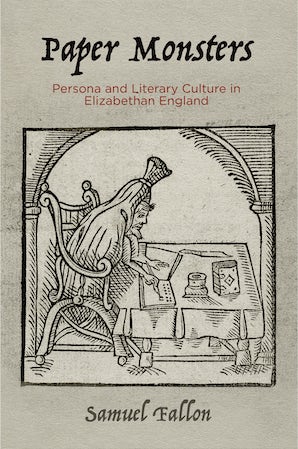 In Paper Monsters, Samuel Fallon charts the striking rise, at the turn to the seventeenth century, of a new species of textual being: the serial, semifictional persona. When Thomas Nashe introduced his charismatic alter ego Pierce Penilesse in a 1592 text, he described the figure as a "paper monster," not fashioned but "begotten" into something curiously like life. The next decade bore this description out, as Pierce took on a life of his own, inspiring other writers to insert him into their own works. And Pierce was hardly alone: such figures as the polemicist Martin Marprelate, the lovers Philisides and Astrophil, the shepherd-laureate Colin Clout, the prodigal wit Euphues, and, in an odd twist, the historical author Robert Greene all outgrew their fictional origins, moving from text to text and author to author, purporting to speak their own words, even surviving their creators' deaths, and installing themselves in the process as agents at large in the real world of writing, publication, and reception.

In seeking to understand these "paper monsters" as a historically specific and rather short-lived phenomenon, Fallon looks to the rapid expansion of the London book trade in the years of their ascendancy. Personae were products of print, the medium that rendered them portable, free-floating figures. But they were also the central fictions of a burgeoning literary field: they embodied that field's negotiations between manuscript and print, and they forged a new form of public, textual selfhood. Sustained by the appropriative rewritings they inspired, personae came to seem like autonomous citizens of the literary public. Fallon argues that their status as collective fictions, passed among writers, publishers, and readers, positioned personae as the animating figures of what we have come to call "print culture."

"[Paper Monsters] throughout is elegantly written, persuasively argued, and well anchored in current theoretical and critical debates: it will be the starting point for any future consideration of literary personae and the role they played in the early modern literary field independently of the authors who created or inspired them."—Journal of British Studies

"Samuel Fallon is a skilled and often revelatory close reader of literature who displays a remarkable familiarity with minor writers and publishers of late Elizabethan England. Capacious and ambitious in its scope, Paper Monsters is a distinctive and highly accomplished piece of literary criticism."—Alan Stewart, Columbia University