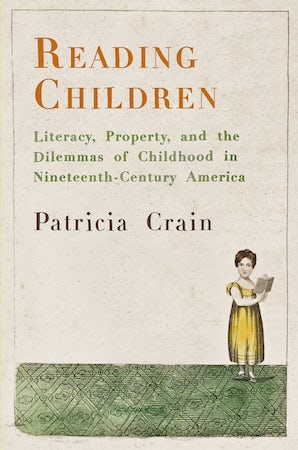 Literacy, Property, and the Dilemmas of Childhood in Nineteenth-Century America

What does it mean for a child to be a "reader" and how did American culture come to place such a high value on this identity? Reading Children offers a history of the relationship between children and books in Anglo-American modernity, exploring long-lived but now forgotten early children's literature, discredited yet highly influential pedagogical practices, the property lessons inherent in children's book ownership, and the emergence of childhood itself as a literary property.

The nursery and schoolroom version of the social contract, Crain argues, underwrote children's entry not only into reading and writing but also into a world of commodity and property relations. Increasingly positioned as an indispensable form of cultural capital by the end of the eighteenth century, literacy became both the means and the symbol of children's newly recognized self-possession and autonomy. At the same time, as children's legal and economic status was changing, "childhood" emerged as an object of nostalgia for adults. Literature for children enacted the terms of children's self-possession, often with explicit references to property, contracts, or inheritances, and yet also framed adult longing for an imagined past called "childhood."

Dozens of colorful illustrations chart the ways in which early literature for children was transformed into spectacle through new image technologies and a burgeoning marketplace that capitalized on nostalgic fantasies of childhood conflated with bowdlerized fantasies of history. Reading Children offers new terms for thinking about the imbricated and mutually constitutive histories of literacy, property, and childhood in the eighteenth and nineteenth centuries that ground current anxieties and long-held beliefs about childhood and reading.

Introduction. Children and Books
Chapter 1. Literacy, Commodities, and Cultural Capital: The Case of Goody Two-Shoes
Chapter 2. The Literary Property of Childhood: The Case of the "Babes in the Wood"
Chapter 3. Colonizing Childhood, Placing Cherokee Children
Chapter 4. "Selling a Boy": Race, Class, and the Literacy Economy of Childhood
Chapter 5. Children in the Margins
Chapter 6. Raising "Master James": The Medial Child and Phantasms of Reading
Coda. Bedtime Stories

Appendix. "The Children in the Wood"
Notes
Bibliography
Index
Acknowledgments

"Reading Children is capacious but rigorous, bringing entirely fresh ways of thinking about what may have seemed like well-trodden material. Crain's prose is precise, clear, and quite often entertaining, and her research is extraordinary."—Modern Philology

"The strengths of this lavishly illustrated study, which includes thirty-five color plates and forty-five black-and-white illustrations, are the evocative, perceptive, and compelling discussions of the relationship between children's reading and property. . . . Crain braids together close analyses of texts, artifacts, and significant contemporary ideas to provide a multidimensional historical account of children's reading that contextualizes the idealized representation that we have come to associate with childhood."—Children's Literature Association Quarterly

"Crain's study makes significant contributions to studies of childhood reading practices and spaces. Her examination of reading in controlled and regulated schoolroom environments as well as private, familial environments adds to current understandings of how public and private scenes of reading and the material culture of books and the spaces in which to read books shape and define childhood."—HIstory of Education Quarterly

"[A] fascinating, wide-ranging study of the ways in which the figure of the child reader-in particular, the image of a child reading his or her own book-has been intertwined in broader cultural narratives about selfhood, memory, commodity ownership, and economic and cultural capital."—Reception

"Patricia Crain has long been one of the handful of scholars whose work I have found truly transformative, changing my sense of the kinds of questions one could ask and of the strategies one might develop for answering them. Reading Children is capacious, precise, and at times breathtakingly original in its vision and methods."—Karen Sánchez-Eppler, Amherst College