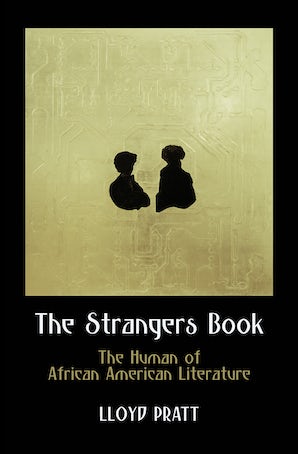 The Human of African American Literature

The Strangers Book explores how various nineteenth-century African American writers radically reframed the terms of humanism by redefining what it meant to be a stranger. Rejecting the idea that humans have easy access to a common reserve of experiences and emotions, they countered the notion that a person can use a supposed knowledge of human nature to claim full understanding of any other person's life. Instead they posited that being a stranger, unknown and unknowable, was an essential part of the human condition. Affirming the unknown and unknowable differences between people, as individuals and in groups, laid the groundwork for an ethical and democratic society in which all persons could find a place. If everyone is a stranger, then no individual or class can lay claim to the characteristics that define who gets to be a human in political and public arenas.

Lloyd Pratt focuses on nineteenth-century African American writing and publishing venues and practices such as the Colored National Convention movement and literary societies in Nantucket and New Orleans. Examining the writing of Frederick Douglass in tandem with that of the francophone free men of color who published the first anthology of African American poetry in 1845, he contends these authors were never interested in petitioning whites for sympathy or for recognition of their humanity. Instead, they presented a moral imperative to develop practices of stranger humanism in order to forge personal and political connections based on mutually acknowledged and always evolving differences.

"[An] important and fresh contribution to the study of African American literature, rereading the works of the canonical Douglass and turning our attention to lesser-known African American francophone poetry . . . Pratt offers [a] compelling and forceful theory and method that no doubt will shape the work of literary scholars and have the power to influence theorizations of African American history."—American Literature

"Pratt's scholarship is timely. As #BlackLivesMatter informs us, the struggle for racial justice in America continues . . . The Strangers Book is about African Americans writing about their experiences of an America that does not permit them to be seen as human. Revealing a complex network of relationships and texts, it offers an innovative framework to understand and read early African American literature. That these writers are communicating through varied kinds of storytelling points to one similarity across difference and time; that the figure of the 'strange negro' persists in the stories of Tamir Rice, Trayvon Martin, or Freddie Gray, points to another."—MELUS

"A lot of academic monographs are credited with offering a critique, but The Strangers Book is the rare book that really and profoundly assesses the limits of what is thinkable. Like black lives, black texts matter. But it rings hollow to claim that both things matters without also disaffirming the existing structures of power-and the categories of person and text that power has established-that create the need to say such things in the first place. Like the Black Lives Matter movement, The Strangers Book offers a utopian affirmation of difference couched in a language of refusal, where the particular matters more than the universal toward which it supposedly should add."—Public Books

"The alternative humanism claimed by former slaves yields many corrective lessons for the present. Lloyd Pratt transforms our understanding of that archive by inserting the figure of the stranger into the interpretative frame. Energized by a host of newly unearthed discoveries, his innovative, absorbing book initiates a novel and urgent enquiry: the entanglement of race with various kinds of xenology. Ambitious and learned, this book will reshape the field of U.S. literary history."—Paul Gilroy, King's College London

"Lloyd Pratt's work addresses and rearticulates, in an exquisite way, current discussions of the status of the human in antebellum African American literature."—Branka Arsić, Columbia University

"The Strangers Book provides a bracing and unexpected perspective on literary history. As Pratt's chapters unfold, the reader begins to see how early African American letters can be read as offering new critical possibilities for Western literature as a whole."—Nancy Bentley, University of Pennsylvania