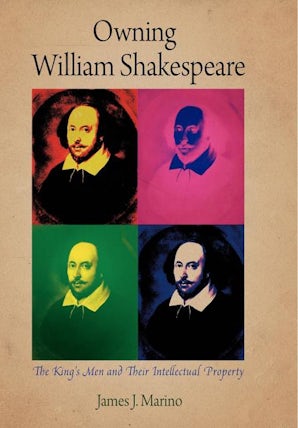 The King's Men and Their Intellectual Property

Copyright is by no means the only device for asserting ownership of a work. Some writers, including playwrights in the early modern period, did not even view print copyright as the most important of their authorial rights. A rich vein of recent scholarship has examined the interaction between royal monopolies, which have been identified with later notions of intrinsic authorial ownership, and the internal copy registration practices of the English book trades. Yet this dialogue was but one part of a still more complicated conversation in early modern England, James J. Marino argues; other customs and other sets of professional demands were at least as important, most strikingly in the exercise of the performance rights of plays.

In Owning William Shakespeare James Marino explores the actors' system of intellectual property as something fundamentally different from the property regimes exercised by the London printers or the royal monopolists. Focusing on Hamlet, The Taming of the Shrew, King Lear, and other works, he demonstrates how Shakespeare's acting company asserted ownership of its plays through intense rewriting combined with progressively insistent attribution to Shakespeare. The familiar versions of these plays were created through ongoing revision in the theater, a process that did not necessarily begin with Shakespeare's original manuscript or end when he died. An ascription by the company of any play to "Shakespeare" did not imply that it was following a fixed, authorial text; rather, Marino writes, it indicates an attempt to maintain exclusive control over a set of open-ended, theatrically revised scripts.

Combining theater history, textual studies, and literary theory, Owning William Shakespeare rethinks both the way Shakespeare's plays were created and the way they came to be known as his. It overturns a century of scholarship aimed at re-creating the playwright's lost manuscripts, focusing instead on the way the plays continued to live and grow onstage.

"Who, in the early modern period, laid claim to owning Shakespeare's plays? How did the property regimes of print and performance determine the nature of such claims? In tackling these questions, James J. Marino scores some palpable hits."—TLS

"Expertly blending literary criticism, performance theory, and historical analysis of intellectual property, Marino masterfully argues for the important role the Chamberlain's Men/King's Men played in vigorously maintaining their ownership in and the authenticity of Shakespeare's plays."—Choice

"A thematically dense, insightful book that will engage readers interested in the origins and evolutions of intellectual property law, of the business of early modern drama, and of textual transmissions and adaptations."—Early English Studies

"In this fascinating study, which brings together literary and textual studies, book and theatre history, the story of how Shakespeare's plays came to be created and known as his is told as a story of the King's Men and their property. Focusing on how intellectual property was created and maintained, Owning William Shakespeare makes important contributions to theatre and book history, puts paid to scholarship premised on the recovery of Shakespeare's authorial script, and argues for a radically revised understanding of early modern dramatic texts."—Review of English Studies

"Owning William Shakespeare tells the story of early modern drama as intellectual property. It does so with energy, urgency, passion, and originality: it points out details about book history and publication that have never been articulated before, redefining the field in important ways."—Tiffany Stern, University College, Oxford