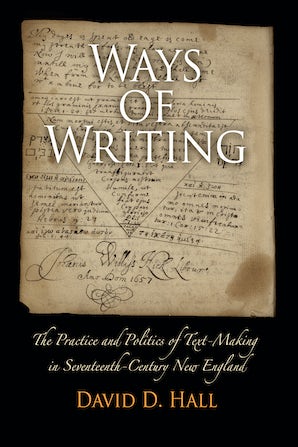 Writers abounded in seventeenth-century New England. From the moment of colonization and constantly thereafter, hundreds of people set pen to paper in the course of their lives, some to write letters that others recopied, some to compose sermons as part of their life work as ministers, dozens to attempt verse, and many more to narrate a remarkable experience, provide written testimony to a civil court, participate in a controversy, or keep some sort of records—and of these everyday forms of writing there was no limit.

Every colonial writer knew of two different modes of publication, each with its distinctive benefits and limitations. One was to entrust a manuscript to a printer who would set type and impose it on sheets of paper that were bound up into a book. The other was to make handwritten copies or have others make copies, possibly unauthorized. Among the colonists, the terms "publishing" and "book" referred to both of these technologies. Ways of Writing is about the making of texts in the seventeenth century, whether they were fashioned into printed books or circulated in handwritten form. The latter mode of publishing was remarkably common, yet it is much less understood or acknowledged than transmission in print. Indeed, certain writers, including famous ones such as John Winthrop and William Bradford, employed scribal publication almost exclusively; the Antimonian controversy of 1636-38 was carried out by this means until manuscripts relating to the struggle began to be printed in England.

Examining printed texts as well as those that were handwritten, David D. Hall explores the practices associated with anonymity, dedications, prefaces, errata, and the like. He also surveys the meaning of authority and authenticity, demonstrating how so many texts were prepared by intermediaries, not by authors, thus contributing to the history of "social" or collaborative authorship. Finally, he considers the political contexts that affected the transmission and publication of many texts, revealing that a space for dissent and criticism was already present in the colonies by the 1640s, a space exploited mainly by scribally published texts.

"[Hall demonstrates] how many well-worn topics stand to be transformed when literature is imagined as a series of practices and books are engaged as material objects. . . . For students of book history and of early New England, Ways of Writing . . . can and should have profound effects on scholarly ways of thinking."—Church History

"Hall's work . . . complicates and refines our notions of the significance of the individual author and his/her originality in making texts during this period as well as the significance we assign the practices of anonymity. . . . [A] richly detailed and engagingly written study."—American Historical Review

"Hall's historical research changes our understanding of what a text is as well as the historical reality we can infer from any example of colonial writing. . . . [He] has given scholars of early American literature a great deal of new work to do."—American Literature