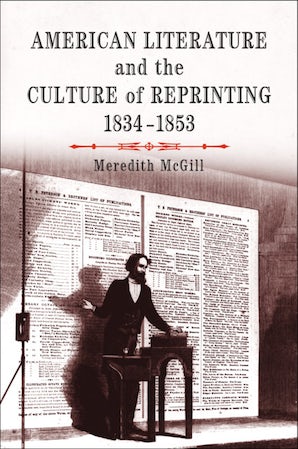 American Literature and the Culture of Reprinting, 1834-1853

The antebellum period has long been identified with the belated emergence of a truly national literature. And yet, as Meredith L. McGill argues, a mass market for books in this period was built and sustained through what we would call rampant literary piracy: a national literature developed not despite but because of the systematic copying of foreign works. Restoring a political dimension to accounts of the economic grounds of antebellum literature, McGill unfolds the legal arguments and political struggles that produced an American "culture of reprinting" and held it in place for two crucial decades.

In this culture of reprinting, the circulation of print outstripped authorial and editorial control. McGill examines the workings of literary culture within this market, shifting her gaze from first and authorized editions to reprints and piracies, from the form of the book to the intersection of book and periodical publishing, and from a national literature to an internally divided and transatlantic literary marketplace. Through readings of the work of Dickens, Poe, and Hawthorne, McGill seeks both to analyze how changes in the conditions of publication influenced literary form and to measure what was lost as literary markets became centralized and literary culture became stratified in the early 1850s. American Literature and the Culture of Reprinting, 1834-1853 delineates a distinctive literary culture that was regional in articulation and transnational in scope, while questioning the grounds of the startlingly recent but nonetheless powerful equation of the national interest with the extension of authors' rights.

"McGill's book will have a major impact on history of the book scholarship as well as upon American literary and cultural studies more generally."—Janice Radway

"In meticulously researched and richly detailed readings, McGill . . . finds an exuberant reprint culture that is both regional and transatlantic."—American Literature