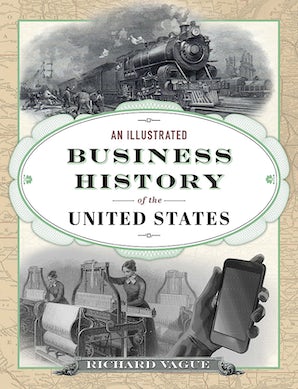 An Illustrated Business History of the United States

From Benjamin Franklin, Robert Morris, and Cornelius Vanderbilt to Steve Jobs, Oprah Winfrey, and Bill Gates, with Madam C.J. Walker, Martha Stewart, Jay-Z, and many more in-between, An Illustrated Business History of the United States is a sweeping, lively, and highly approachable history of American business from the nation's founding to the twenty-first century.

Author Richard Vague divides this history into fourteen eras, with each era featuring lists of the wealthiest individuals, notable inventions, and companies founded, and the largest organizations, banks, and insurance companies. Much of the data to create these lists stems from original research, and the book contains a wealth of primary business information extended and supplemented on a companion website.

Major themes include the nation's business beginnings in land and real estate, the pivotal place of financial institutions from the nation's earliest days, America's emergence as an industrial powerhouse, its outsized innovations, the dominance of its railways, automobiles, and other transportation companies, and the ever-changing role of government. As the book moves to the contemporary era, it highlights the merchandising of comfort, entertainment, and controversy, and looks to the future as it touches on the potential of emerging industries such as genetic engineering, green energy, and virtual reality.

A must read for any student of American history, the book covers both catastrophe and triumph, innovation and failure, and provides a crucial context for a better understanding of the nation's political and social history. Lushly illustrated with 300 color images, it is equally rewarding for those who want to read it cover to cover and those who prefer to focus on select eras of special interest.

""The breadth of [Vague's] scholarship and sourcing of materials offers lessons of great value to political decision-makers and businesspeople. The stories and brief biographies of characters are amusing but readers should learn from the successes and failures.""—The Jerusalem Post

"Vague offers a fast-paced and readable chronological survey of American business history that takes note of individuals and companies that have contributed to the nation’s economic development."—Choice