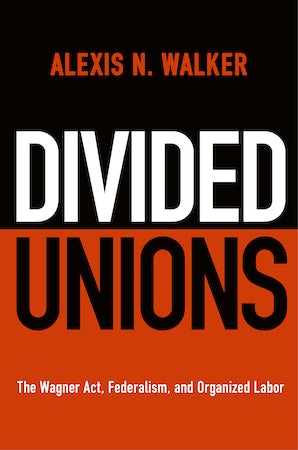 The 2011 battle in Wisconsin over public sector employees' collective bargaining rights occasioned the largest protests in the state since the Vietnam War. Protestors occupied the state capitol building for days and staged massive rallies in downtown Madison, receiving international news coverage. Despite an unprecedented effort to oppose Governor Scott Walker's bill, Act 10 was signed into law on March 11, 2011, stripping public sector employees of many of their collective bargaining rights and hobbling government unions in Wisconsin. By situating the events of 2011 within the larger history of public sector unionism, Alexis N. Walker demonstrates how the passage of Act 10 in Wisconsin was not an exceptional moment, but rather the culmination of events that began over eighty years ago with the passage of the Wagner Act in 1935.

Although explicitly about government unions, Walker's book argues that the fates of public and private sector unions are inextricably linked. She contends that the exclusion of public sector employees from the foundation of private sector labor law, the Wagner Act, firmly situated private sector law at the national level, while relegating public sector employees' efforts to gain collective bargaining rights to the state and local levels. She shows how private sector unions benefited tremendously from the national-level protections in the law while, in contrast, public sector employees' efforts progressed slowly, were limited to union-friendly states, and the collective bargaining rights that they finally did obtain were highly unequal and vulnerable to retrenchment. As a result, public and private sector unions peaked at different times, preventing a large, unified labor movement. The legacy of the Wagner Act, according to Walker, is that labor remains geographically concentrated, divided by sector, and hobbled in its efforts to represent working Americans politically in today's era of rising economic inequality.

Chapter 1. Introduction
Chapter 2. The Wagner Act: A Critical Exclusion
Chapter 3. After Wagner (1936-1960): Life Without Collective Bargaining Rights
Chapter 4. 1961: The Public Sector's Watershed Moment
Chapter 5. The 1970s: Labor Out of Alignment
Chapter 6. The Late 1970s to the 2010s: Labor on the Decline
Chapter 7. The 2010s: The Modern Assault Against Public Sector Unions
Chapter 8. Conclusion: The Consequences of Labor's Enduring Divide

"Well-researched and convincingly argued, Divided Unions is timely in its coverage of private- and public-sector labor over a period of nearly eighty years. I can think of no other book that comes close to accomplishing what Alexis N. Walker has accomplished."—Joseph E. Slater, University of Toledo College of Law

"Divided Unions offers a persuasive argument about the impact of federalism and geography on public sector unions that is sorely needed in current public discourse."—David B. Robertson, University of Missouri-St. Louis