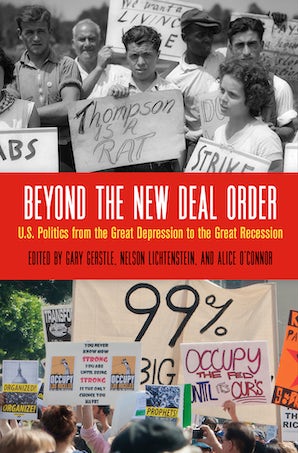 Beyond the New Deal Order

U.S. Politics from the Great Depression to the Great Recession

Ever since introducing the concept in the late 1980s, historians have been debating the origins, nature, scope, and limitations of the New Deal order—the combination of ideas, electoral and governing strategies, redistributive social policies, and full employment economics that became the standard-bearer for political liberalism in the wake of the Great Depression and commanded Democratic majorities for decades. In the decline and break-up of the New Deal coalition historians found keys to understanding the transformations that, by the late twentieth century, were shifting American politics to the right.

In Beyond the New Deal Order, contributors bring fresh perspective to the historic meaning and significance of New Deal liberalism while identifying the elements of a distinctively "neoliberal" politics that emerged in its wake. Part I offers contemporary interpretations of the New Deal with essays that focus on its approach to economic security and inequality, its view of participatory governance, and its impact on the Republican party as well as Congressional politics. Part II features essays that examine how intersectional inequities of class, race, and gender were embedded in New Deal labor law, labor standards, and economic policy and brought demands for employment, economic justice, and collective bargaining protections to the forefront of civil rights and social movement agendas throughout the postwar decades. Part III considers the precepts and defining narratives of a "post" New Deal political structure, while the closing essay contemplates the extent to which we may now be witnessing the end of a neoliberal system anchored in free-market ideology, neo-Victorian moral aspirations, and post-Communist global politics.

"If we want to understand the driving forces and the scope of the wide-ranging shifts in our societies on both sides of the Atlantic and beyond, it is essential, then, to be more precise about neoliberalism as an analytical concept and as a tool to grasp historical change. This is one of the goals of Gary Gerstle, Nelson Lichtenstein, and Alice O’Connor’s recent look at the New Deal order and its transformation. Refining the earlier claim of a radical shift brought about by the presidency of Ronald Reagan, the authors instead point at an accumulation of changes which, ultimately, signaled the inception of a new ‘neoliberal order.'"—Reviews in American History

"[An] important synthesis of twentieth-century US history with [a] much-needed framework for the ‘Neoliberal Order’ which could be said to have defined the US political-economy from 1980 to 2016… [A]n extremely valuable book for anyone looking to understand the limits and unfulfilled promise of the New Deal state."—The New England Quarterly

"As both a historical and historiographical marker of persistence and transformation, this outstanding volume invites readers to consider anew the New Deal's legacies and successors. Offering inventive analytical reflections that illuminate recent decades of the American experience, the book's bracing essays prompt fresh thought about periodization, historical causation, the scope of possibility, and a good deal more."—Ira Katznelson, author of Fear Itself: The New Deal and the Origins of Our Time

"An ambitious and exciting collection. After twenty-five years of reflection, do historians believe there was a 'New Deal order'? If there was, and it ended, what replaced it? How have understandings of the postwar period changed to accommodate a fuller sense of what the New Deal accomplished and what its limits were? Each essay is compelling and the various questions they address are deeply important."—Kimberly Phillips-Fein, author of Fear City: New York's Fiscal Crisis and the Rise of Austerity Politics

"A timely book that will appeal to anyone interested in American politics from the New Deal to the present. Every chapter, without exception, is excellent."—Daniel Geary, author of Beyond Civil Rights: The Moynihan Report and Its Legacy