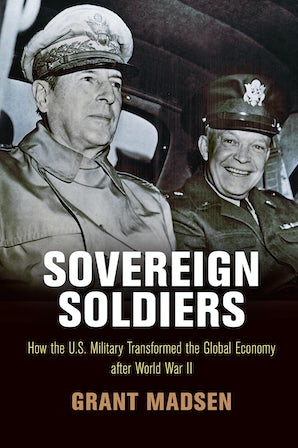 How the U.S. Military Transformed the Global Economy After World War II

They helped conquer the greatest armies ever assembled. Yet no sooner had they tasted victory after World War II than American generals suddenly found themselves governing their former enemies, devising domestic policy and making critical economic decisions for people they had just defeated in battle. In postwar Germany and Japan, this authority fell into the hands of Dwight D. Eisenhower and Douglas MacArthur, along with a cadre of military officials like Lucius Clay and the Detroit banker Joseph Dodge.

In Sovereign Soldiers, Grant Madsen tells the story of how this cast of characters assumed an unfamiliar and often untold policymaking role. Seeking to avoid the harsh punishments meted out after World War I, military leaders believed they had to rebuild and rehabilitate their former enemies; if they failed they might cause an even deadlier World War III. Although they knew economic recovery would be critical in their effort, none was schooled in economics. Beyond their hopes, they managed to rebuild not only their former enemies but the entire western economy during the early Cold War.

Introduction
Chapter 1. When the Military Became an External State
Chapter 2. The War, the Economy, and the Army
Chapter 3. The Army in a Time of Depression
Chapter 4. The Army, the New Deal, and the Planning for the Postwar
Chapter 5. "The Thing Was Assembled by Economic Idiots"
Chapter 6. The Army Creates a Plan for Germany
Chapter 7. A German "Miracle"
Chapter 8. Political Progress in Japan—and Economic Decline
Chapter 9. "Recovery Without Fiction"
Chapter 10. Implementing the Lessons of Victory in Japan
Chapter 11. Truman and Eisenhower
Chapter 12. "The Great Equation"
Chapter 13. Protecting the Global Economy
Epilogue

"President Eisenhower's warning of a 'military-industrial complex' looms large in contemporary American politics. This book offers the crucial historical background to explain what Eisenhower meant. Grant Madsen shows how U.S. Army leaders after the Second World War worked to build a global economy hinged on low inflation, inexpensive capital, and free trade. He explains how this model seeded postwar prosperity at home as well as in Europe and Asia, and also how it unraveled in the 1960s and 1970s-a victim of its own successes. This book is essential reading for anyone interested in the historical roots of our current global economy and its discontents."—Jeremi Suri, author of The Impossible Presidency: The Rise and Fall of America's Highest Office

"Sovereign Soldiers offers a lively account of economic policymaking in post-World War II Germany, Japan, and the United States. Drawing on original research, Grant Madsen describes the activities of top American occupation officials, including Dwight Eisenhower and Douglas MacArthur as well as General Lucius D. Clay and Detroit banker Joseph Dodge. Charged with overseeing the reconstruction of postwar Germany and Japan, these overseas American officials developed a distinctive approach to political economy, which, as Madsen shows, had lasting influence-not only in Europe and Asia but also back in the United States."—Mark R. Wilson, author of Destructive Creation: American Business and the Winning of World War II