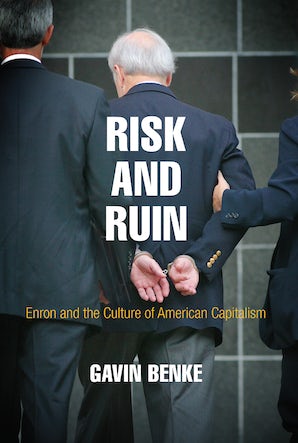 Enron and the Culture of American Capitalism

At the time of its collapse in 2001, Enron was one of the largest companies in the world, boasting revenue of over $100 billion. During the 1990s economic boom, the Houston, Texas-based energy company had diversified into commodities and derivatives trading and many other ventures—some more legal than others. In the lead-up to Enron's demise, it was revealed that the company's financial success was sustained by a creatively planned and well-orchestrated accounting fraud. The story of Enron and its disastrous aftermath has since become a symbol of corporate excess and negligence, framed as an exceptional event in the annals of American business.

With Risk and Ruin, Gavin Benke places Enron's fall within the larger history and culture of late twentieth-century American capitalism. In many ways, Benke argues, Enron was emblematic of the transitions that characterized the era. Like Enron, the American economy had shifted from old industry to the so-called knowledge economy, from goods to finance, and from national to global modes of production.

Benke dives deep into the Enron archives, analyzing company newsletters, board meeting minutes, and courtroom transcriptions to chart several interconnected themes across Enron's history: the changing fortunes of Houston; the shifting attitudes toward business strategy, deregulation, and the function of the market among policy makers and business leaders; and the cultural context that accompanied and encouraged these broader political and economic changes. Considered against this backdrop, Enron takes on new significance as a potent reminder of the unaddressed issues still facing national and global economies.

Published in cooperation with the William P. Clements Center for Southwest Studies at Southern Methodist University.

"[A]s readers will learn from Gavin Benke in his insightful new book, Risk and Ruin, the criminal actions of Enron's executives must not be understood in isolation; rather, they must be embedded in the economic world that enabled-even encouraged-Enron's practices. This approach to Enron's history adds significant context and detail to existing accounts of the firm, and benefits from methods favored in recent years by scholars addressing the history of capitalism."—Enterprise & Society

"Risk and Ruin paints a compelling picture of Enron's transformation . . . [and] suggests that focusing on the individual senior managers rather than the broader business and regulatory environment allowed business journalists, Wall Street analysts, and regulators to treat the company's experience as an aberration rather than evidence of problems with the financial system."—The Journal of Economic History

"Moving fluidly between archival sources, press coverage, and financial reporting, Benke details how Enron created its own image, first as a 'green' company that could act responsibly toward the environment, and later as a seemingly invincible corporation charting a futuristic vision of American and global capitalism, one dependent on deregulation to accommodate globalization . . . [A]s Benke warns, though Enron's fraud is now history, the cultural and economic systems in which it thrived remain."—Journal of American History

"Risk and Ruin is a clear and concise account of the Enron story, and will be useful to business historians and those interested in corporate governance, financial regulation and the energy industry. However, it also attempts to situate the particularities of Enron's corporate culture in relation to the wider political and economic dimensions of the 'New Economy'. As such, it is a welcome and valuable addition to the rapidly growing literature on the history of American capitalism."—History

"[Benke] writes persuasively that we—academics, critics of capitalism, policymakers—ignore Enron’s history and failures to our peril. His narrative, a quite compulsively readable account that includes lots of rich history, institutional detail, and salacious anecdotes, makes a convincing case for Enron as a harbinger of financial, environmental, and production crises yet to come in the first decades of the twenty-first century…[A] eminently worthy text for those interested in the histories of capitalism and financialization, energy market deregulation and environmental degradation, and the persistent linkages between corporate and public interests that facilitate these developments."—Finance and Society

"Benke offers the first satisfying account of what went wrong at Enron, and in doing so, he suggests what has changed within capitalism since the 1970s. Though he is pushing back on literary conventions, the book is beautifully written and engaging...[T]he book succeeds on many levels...Benke is as comfortable demystifying finance as he is demystifying the odd ways that Americans made sense of finance. The literary quality of previous Enron books might have made for good storytelling but bad history. As Benke points out, Enron was the new rule, not an exception, and in that, this book is good history."—American Historical Review

"Gavin Benke takes us on an adventurous journey into the complex network of gas pipelines and cash channels that gave shape to the Enron empire. He does not shy away from the complex financial systems that made Enron so profitable, and digs deep into the SPEs and other financial creations that made Enron tick. Risk and Ruin is extremely important, given the financial storms that loom ahead."—Bartow Elmore, author of Citizen Coke: The Making of Coca-Cola Capitalism

"Risk and Ruin tells the story of Enron's well-known business collapse in a new way, critically situating the firm's financial misdoings in a broader neoliberal context. Gavin Benke has written an original and significant contribution to the literature on modern American business and the history of capitalism."—Vicki Howard, author of From Main Street to Mall: The Rise and Fall of the American Department Store