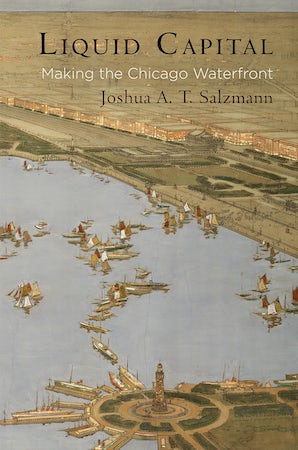 by Joshua A. T. Salzmann

In the nineteenth century, politicians transformed a disease-infested bog on the southwestern shore of Lake Michigan into an intensively managed waterscape supporting the life and economy of Chicago, now America's third-most populous city. In Liquid Capital, Joshua A. T. Salzmann shows how, through a combination of entrepreneurship, civic spirit, and bareknuckle politics, the Chicago waterfront became a hub of economic and cultural activity while also the site of many of the nation's precendent-setting decisions about public land use and environmental protection. Through the political saga of waterfront development, Salzmann illuminates Chicago's seemingly paradoxical position as both a paragon of buccaneering capitalism and assertive state power.

The list of actions undertaken by local politicians and boosters to facilitate the waterfront's success is long: officials reversed a river, built a canal to fuse the Great Lakes and Mississippi River watersheds, decorated the lakeshore with parks and monuments, and enacted regulations governing the use of air, land, and water. With these feats of engineering and statecraft, they created a waterscape conducive to commodity exchange, leisure tourism, and class harmony—in sum, an invaluable resource for profit making. Their actions made the city's growth and the development of its western hinterlands possible. Liquid Capital sheds light on these precedent-making policies, their effect on Chicago's development as a major economic and cultural force, and the ways in which they continue to shape legislation regarding the use of air and water.

Introduction. State Power and the Rise of Chicago
Chapter 1. Making a River Run Through It
Chapter 2. The Legal Construction of Free Marketplaces
Chapter 3. The Creative Destruction of the Chicago River Harbor
Chapter 4. Beauty and the Crisis of Commercial Civilization
Chapter 5. A Public Pier for Pleasure and Profit
Epilogue. A Waterscape for the New Millennium

"Salzmann's study of the Chicago waterfront is informative and insightful. His use of detailed archival and published sources to argue for the importance of the state in promoting economic development and creating space for recreation and tourism illuminates the various interests and forces that influence policy."—Joel Tarr, Carnegie Mellon University

"Taking a commendably long view of Chicago's waterfront development enables Salzmann to contend that the state promotion of economic development did not begin in the Progressive Era, but has a much longer history. Liquid Capital widens our understanding of both public and private and contributes to the broader discussion in several interrelated fields: urban studies, environmental history, and the history of capitalism."—Ann Durkin Keating, North Central College