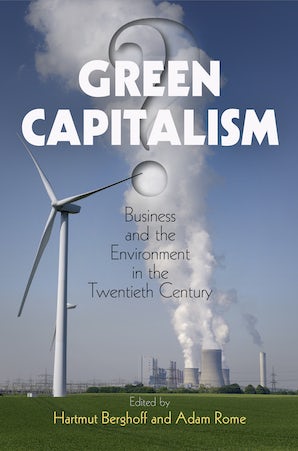 Business and the Environment in the Twentieth Century

At a time when the human impact on the environment is more devastating than ever, business initiatives frame the quest to "green" capitalism as the key to humanity's long-term survival. Indeed, even before the rise of the environmental movement in the 1970s, businesses sometimes had reasons to protect parts of nature, limit their production of wastes, and support broader environmental reforms. In the last thirty years, especially, many businesses have worked hard to reduce their direct and indirect environmental footprint. But are these efforts exceptional, or can capitalism truly be environmentally conscious?

Green Capitalism? offers a critical, historically informed perspective on building a more sustainable economy. Written by scholars of business history and environmental history, the essays in this volume consider the nature of capitalism through historical overviews of twentieth-century businesses and a wide range of focused case studies. Beginning early in the century, contributors explore the response of business leaders to environmental challenges in an era long before the formation of the modern regulatory state. Moving on to midcentury environmental initiatives, scholars analyze failed business efforts to green products and packaging—such as the infamous six-pack ring—in the 1960s and 1970s. The last section contains case studies of businesses that successfully managed greening initiatives, from the first effort by an electric utility to promote conservation, to the environmental overhaul of a Swedish mining company, to the problem of household waste in pre-1990 West Germany. Ranging in geographic scope from Europe to the United States, Green Capitalism? raises questions about capitalism in different historical, sociocultural, and political contexts.

PART I. THE BIG PICTURE
Chapter 1. The Ecology of Commerce: Environmental History and the Challenge of Building a Sustainable Economy
—Adam Rome 1
Chapter 2. Shades of Green: A Business-History Perspective on Eco-Capitalism
—Hartmut Berghoff
Chapter 3. The Role of Businesses in Constructing Systems of Environmental Governance
—Hugh S. Gorman

"Fresh and thought-provoking . . . [W]hat makes this volume stand out is its emphasis on creative deployment of business history techniques to get at new understandings of manmade ecological change. By paying close attention to firm structure and strategy-the stuff of old-school business history-these authors show how historical research into corporations might offer innovative solutions to the pressing global environmental problems we face today."—Environmental History

"[T]he ambiguity highlighted in Green Capitalism is the type that enables readers to develop more sophisticated interpretations of-or at least approaches to-green capitalism interpretations and approaches that defy caricature and can't be adequately conveyed on a bumper sticker . . . One puts down this fine book convinced of the importance of the longstanding relationship between business and the environment, more aware of the complexities and contradictions involved in said relationship, and yes, more understanding of the increasing power of the concept of green capitalism today.""—Technology and Culture

"Green Capitalism? is a very forward-looking volume in its focus on how the two 'isms'-capitalism and environmentalism-might find common cause. Taken together, these excellent essays tell a story regarding the challenges of 'green capitalism' that readers of both history and environmental policy will find useful."—Sean Adams, University of Florida