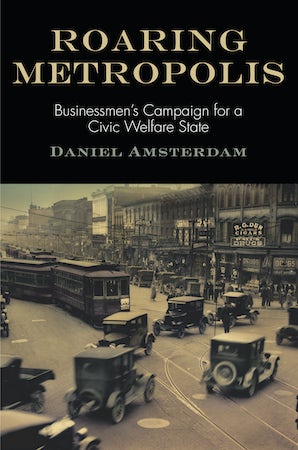 Debates about poverty and inequality in the United States frequently invoke the early twentieth century as a time when new social legislation helped moderate corporate power. But as historian Daniel Amsterdam shows, the relationship between business interests and the development of American government was hardly so simple.

Roaring Metropolis reconstructs the ideas and activism of urban capitalists roughly a century ago. Far from antigovernment stalwarts, business leaders in cities across the country often advocated extensive government spending on an array of social programs. They championed public schooling, public health, the construction of libraries, museums, parks, and playgrounds, and decentralized cities filled with freestanding homes—a set of initiatives that they believed would foster political stability and economic growth during an era of explosive, often chaotic, urban expansion.

The efforts of businessmen on this front had deep historical roots but bore the most fruit during the 1920s, an era often misconstrued as an antigovernment moment. As Daniel Amsterdam illustrates, public spending soared across urban America during the decade due in part to businessmen's political activism. With a focus on three different cities—Detroit, Philadelphia, and Atlanta—and a host of political groups—organized labor, machine politicians, African American and immigrant activists, middle-class women's groups, and the Ku Klux Klan—Roaring Metropolis traces businessmen's quest to build cities and nurture an urban citizenry friendly to capitalism and the will of urban capitalists.

"Roaring Metropolis is a great success . . . a terrific read."—EH.net

"[In] deeply researched and tightly drawn chapters . . . Amsterdam traces, with greater detail and acuity than any previous scholar, what kinds of social programs businessmen supported, and why, and with what consequences."—Business History Review

"In Roaring Metropolis, Amsterdam joins a burgeoning community of scholars . . . combining compelling historical research with a sophisticated understanding of the complex nature of 'businessmen' as historical actors."—Journal of Interdisciplinary History

"We tend to think of 1920s cities as cockpits of cultural conflict. In this exemplary study Daniel Amsterdam gives us a new perspective, showing with subtlety and precision the modern metropolis as businessmen wanted it to be. Anyone interested in the construction of urban America needs to read this enlightening book."—Kevin Boyle, Northwestern University