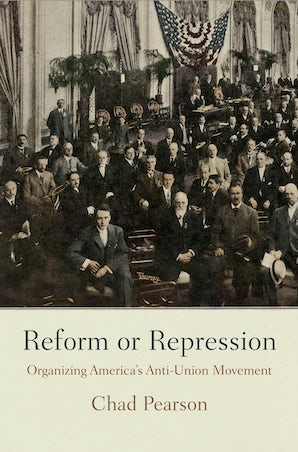 Historians have characterized the open-shop movement of the early twentieth century as a cynical attempt by business to undercut the labor movement by twisting the American ideals of independence and self-sufficiency to their own ends. The precursors to today's right-to-work movement, advocates of the open shop in the Progressive Era argued that honest workers should have the right to choose whether or not to join a union free from all pressure. At the same time, business owners systematically prevented unionization in their workplaces.

While most scholars portray union opponents as knee-jerk conservatives, Chad Pearson demonstrates that many open-shop proponents identified themselves as progressive reformers and benevolent guardians of America's economic and political institutions. By exploring the ways in which employers and their allies in journalism, law, politics, and religion drew attention to the reformist, rather than repressive, character of the open-shop movement, Pearson's book forces us to consider the origins, character, and limitations of this movement in new ways. Throughout his study, Pearson describes class tensions, noting that open-shop campaigns primarily benefited management and the nation's most economically privileged members at the expense of ordinary people.

Pearson's analysis of archives, trade journals, newspapers, speeches, and other primary sources elucidates the mentalities of his subjects and their times, rediscovering forgotten leaders and offering fresh perspectives on well-known figures such as Theodore Roosevelt, Louis Brandeis, Booker T. Washington and George Creel. Reform or Repression sheds light on businessmen who viewed strong urban-based employers' and citizens' associations, weak unions, and managerial benevolence as the key to their own, as well as the nation's, progress and prosperity.

Introduction. Reformers and Fighters: Employers and the Labor Problem

PART I. NATION
Chapter 1. Fighting "Union Dictation": Birth of the Open-Shop Movement
Chapter 2. "For the Protection of the Common People": Citizens, Progressives, and "Free Workers"

PART II. REGION
Chapter 3. A Tale of Two Men: Class Traitors and Strikebreaking in Cleveland
Chapter 4. Avenging McKinley: Organized Employers in Buffalo
Chapter 5. Making the "City of Prosperity": The Poetry of Industrial Harmony in Worcester
Chapter 6. "A Solid South for the Open Shop": N. F. Thompson and the Labor Solution

Chad Pearson is Lecturer of History at the University of North Texas.

""Reform or Repression is a well-researched, informative history of the open-shop movement from 1890 to 1917. Chad Pearson provides a new, much-needed 'employer-centered analysis' . . . [that] is ambitious and far-reaching."—American Historical Review

"Repression or Reform attacks the "Labor Problem" with startling vigor. Armed with an exceptional amount of well-researched detail, . . . Pearson's prudently fashioned prose represents a superb and intimate understanding of the critical actors in this era of American labor history."—Journal of Economic History

"Pearson's book is without a doubt among the best labor histories to be published in recent years. In keeping with the modern trend in labor history, this is not a labor history in the "traditional" sense of the term. Rather than being based on union minutes and other records and on union publications, Reform or Repression is almost exclusively based on sources produced by the employing class . . . [A] truly great read, especially today when union membership has fallen to a historical low."—Against the Current

"A truly outstanding study on the pre-WW I origins of the 'open-shop' movement. . . . Highly Recommended."—Choice

"With a careful historian's eye for detail, Pearson charts the course of American business in its effort to contain and control the appeal of unionism to American workers. In doing so, he sheds light on the consciousness of businessmen and their associations and demonstrates that they were confronted by a strategic choice: whether to coopt or repress the American labor movement . . . This book makes an impressive contribution to understanding the diverse roots of the open shop movement. By focusing on employers' agency, the author has helped us see the crucial role of ideology in reproducing capitalist hegemony."—Socialism and Democracy

"Pearson's explorations of the varied commitments of open shop advocates to reform causes-including the open shop-provides a salutary illustration of the dangers of reductionist historical accounts."—Tom Mitchell, Labour/Le Travail

"Meticulously researched and well written, Reform or Repression tells a series of dramatic, linked stories of open shop campaigns. The book is part of a growing trend of labor historians studying management, though there is no other book quite like it."—David Roediger, author of The Wages of Whiteness: Race and the Making of the American Working Class