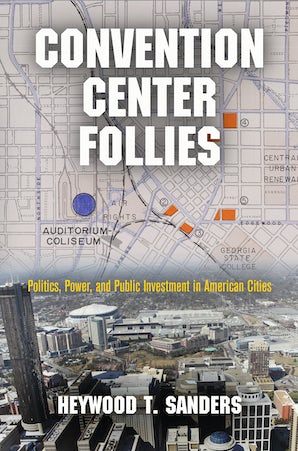 American cities have experienced a remarkable surge in convention center development over the last two decades, with exhibit hall space growing from 40 million square feet in 1990 to 70 million in 2011—an increase of almost 75 percent. Proponents of these projects promised new jobs, new private development, and new tax revenues. Yet even as cities from Boston and Orlando to Phoenix and Seattle have invested in more convention center space, the return on that investment has proven limited and elusive. Why, then, do cities keep building them?

Written by one of the nation's foremost urban development experts, Convention Center Follies exposes the forces behind convention center development and the revolution in local government finance that has privileged convention centers over alternative public investments. Through wide-ranging examples from cities across the country as well as in-depth case studies of Chicago, Atlanta, and St. Louis, Heywood T. Sanders examines the genesis of center projects, the dealmaking, and the circular logic of convention center development. Using a robust set of archival resources—including internal minutes of business consultants and the personal papers of big city mayors—Sanders offers a systematic analysis of the consultant forecasts and promises that have sustained center development and the ways those forecasts have been manipulated and proven false. This record reveals that business leaders sought not community-wide economic benefit or growth but, rather, to reshape land values and development opportunities in the downtown core.

"In Convention Center Follies, Heywood Sanders deflates overblown claims that convention centers will contribute to urban economic development and explains why city leaders so easily succumb to these claims. This carefully researched and clearly argued book is an exceptionally important contribution to the study of urban redevelopment and the politics of policy making."—Susan S. Fainstein, author of Policy, Planning, and People: Promoting Justice in Urban Development

"Heywood Sanders describes in rich detail how, beginning in the 1950s and continuing into the twenty-first century, American metropolises have made convention centers key elements in their efforts to revitalize ailing central business districts-and why the billions of dollars spent on the enterprise have yielded such meager results. An eye-opening study written clearly and forcefully, Convention Center Follies is essential reading for anyone interested in understanding the factors that have shaped modern U.S. cities."—Roger Biles, Illinois State University