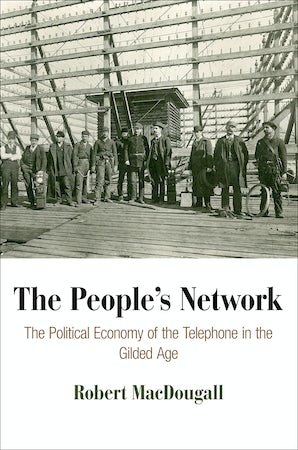 The Political Economy of the Telephone in the Gilded Age

The Bell System dominated telecommunications in the United States and Canada for most of the twentieth century, but its monopoly was not inevitable. In the decades around 1900, ordinary citizens—farmers, doctors, small-town entrepreneurs—established tens of thousands of independent telephone systems, stringing their own wires to bring this new technology to the people. Managed by opportunists and idealists alike, these small businesses were motivated not only by profit but also by the promise of open communication as a weapon against monopoly capital and for protection of regional autonomy. As the Bell empire grew, independents fought fiercely to retain control of their local networks and companies—a struggle with an emerging corporate giant that has been almost entirely forgotten.

The People's Network reconstructs the story of the telephone's contentious beginnings, exploring the interplay of political economy, business strategy, and social practice in the creation of modern North American telecommunications. Drawing from government documents in the United States and Canada, independent telephone journals and publications, and the archives of regional Bell operating companies and their rivals, Robert MacDougall locates the national debates over the meaning, use, and organization of the telephone industry as a turning point in the history of information networks. The competing businesses represented dueling political philosophies: regional versus national identity and local versus centralized power. Although independent telephone companies did not win their fight with big business, they fundamentally changed the way telecommunications were conceived.

Introduction. A Fight with an Octopus
Chapter 1. All Telephones Are Local
Chapter 2. Visions of Telephony
Chapter 3. Unnatural Monopoly
Chapter 4. The Independent Alternative
Chapter 5. The Politics of Scale
Chapter 6. The System Gospel
Conclusion. Return to Middletown

"Original, impressive, and a tremendous pleasure to read. The independent telephone movement has been utterly neglected by historians; with wide-ranging research, Robert MacDougall makes a persuasive case for its significance."—Rebecca Edwards, Vassar College