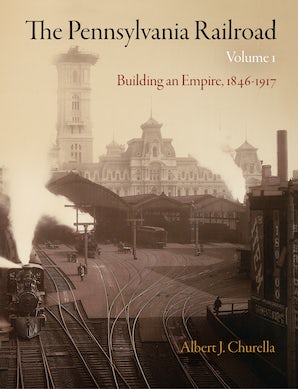 "Do not think of the Pennsylvania Railroad as a business enterprise," Forbes magazine informed its readers in May 1936. "Think of it as a nation." At the end of the nineteenth century, the Pennsylvania Railroad was the largest privately owned business corporation in the world. In 1914, the PRR employed more than two hundred thousand people—more than double the number of soldiers in the United States Army. As the self-proclaimed "Standard Railroad of the World," this colossal corporate body underwrote American industrial expansion and shaped the economic, political, and social environment of the United States. In turn, the PRR was fundamentally shaped by the American landscape, adapting to geography as well as shifts in competitive economics and public policy. Albert J. Churella's masterful account, certain to become the authoritative history of the Pennsylvania Railroad, illuminates broad themes in American history, from the development of managerial practices and labor relations to the relationship between business and government to advances in technology and transportation.

Churella situates exhaustive archival research on the Pennsylvania Railroad within the social, economic, and technological changes of nineteenth- and twentieth-century America, chronicling the epic history of the PRR intertwined with that of a developing nation. This first volume opens with the development of the Main Line of Public Works, devised by Pennsylvanians in the 1820s to compete with the Erie Canal. Though a public rather than a private enterprise, the Main Line foreshadowed the establishment of the Pennsylvania Railroad in 1846. Over the next decades, as the nation weathered the Civil War, industrial expansion, and labor unrest, the PRR expanded despite competition with rival railroads and disputes with such figures as Andrew Carnegie and John D. Rockefeller. The dawn of the twentieth century brought a measure of stability to the railroad industry, enabling the creation of such architectural monuments as Pennsylvania Station in New York City. The volume closes at the threshold of American involvement in World War I, as the strategies that PRR executives had perfected in previous decades proved less effective at guiding the company through increasingly tumultuous economic and political waters.

"Finally, we have a meticulously researched, sensibly crafted, and beautifully written history of the Pennsylvania Railroad. In this first volume Albert Churella traces the 'Pennsy' from its gestation to the outbreak of World War I, leaving a forthcoming study to explore the decline and death of this great American enterprise. Churella provides a feel for the railroad, and he always considers the broader historical context. This book will become the standard history of the 'Standard Railroad of the World.'"—H. Roger Grant, Clemson University

"I've long thought it unlikely that anyone would produce a full history of the Pennsylvania Railroad, as the topic was simply too vast. Happily, I've been proven wrong. Albert Churella has captured the PRR's multifaceted history with a combination of deep original research in primary sources and attention to the best contemporary scholarship, blending close attention to internal developments and personalities with an equally rich account of external social, political, and technological realities. A truly landmark publication."—Christopher T. Baer, Hagley Museum and Library

"Mining a treasure trove of archival material, Albert Churella has produced a monumental history of a singularly important institution. This work will be an invaluable resource, not only for railroad historians and those interested in the Pennsylvania Railroad and the regions it served. But for all students of American industrial history."—Steven W. Usselman, author of Regulating Railroad Innovation: Business, Technology, and Politics in America