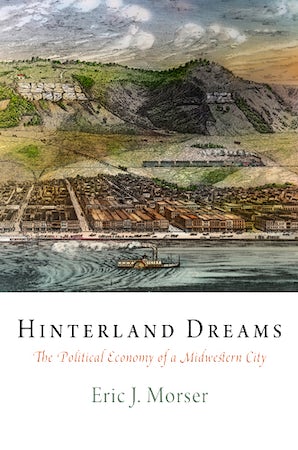 The Political Economy of a Midwestern City

In the 1840s, La Crosse, Wisconsin, was barely more than a trading post nestled on the banks of the Mississippi River. But by 1900 the sleepy frontier town had become a thriving city. Hinterland Dreams tracks the growth of this community and shows that government institutions and policies were as important as landscapes and urban boosters in determining the small Midwestern city's success. The businessmen and -women of La Crosse worked hard to attract government support during the nineteenth century. Federal, state, and municipal officials passed laws, issued rulings, provided resources, vested aldermen with financial and regulatory power, and created a lasting legal foundation that transformed the city and its economy. As historian Eric J. Morser demonstrates, the development of La Crosse and other small cities linked rural people to the wider world and provided large cities like Chicago with the lumber and other raw materials needed to grow even larger. He emphasizes the role of these municipalities, as well as their relationship to all levels of government, in the life of an industrializing nation.

Punctuated with intriguing portraits of La Crosse's early citizens, Hinterland Dreams suggests a new way to understand the Midwest's urban past, one that has its roots in the small but vibrant cities that dotted the landscape. By mapping the richly textured political economy of La Crosse before 1900, the book highlights how the American state provided hinterland Midwesterners with potent tools to build cities and help define their region's history in profound and lasting ways.

"An enjoyable and innovative look into the forging of American individualism and exceptionalism."—Urban History

"From the perspective of a small city in the Midwest, Morser impressively contributes to our understanding of how the 'hinterland dreams' of a small city could affect regional development."—Journal of American History

"Good history occasionally intersects with good storytelling to create a remarkable result. This book is one such happy achievement. . . . Fascinating . . . Highly recommended."—Choice

"Hinterland Dreams is a clearly written, well organized, and thoroughly researched work. Urban history has focused on the giants like Chicago. Smaller cities have largely been neglected until now. By examining La Crosse, Wisconsin, Morser breaks new ground and offers a needed reminder of the importance of government in urban development."—Jon C. Teaford, Purdue University