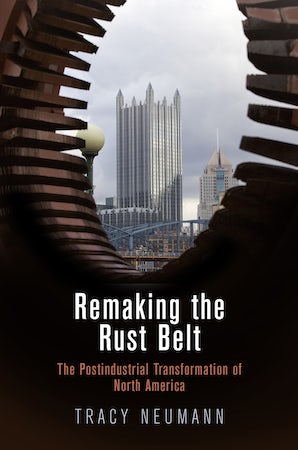 The Postindustrial Transformation of North America

Cities in the North Atlantic coal and steel belt embodied industrial power in the early twentieth century, but by the 1970s, their economic and political might had been significantly diminished by newly industrializing regions in the Global South. This was not simply a North American phenomenon—the precipitous decline of mature steel centers like Pittsburgh, Pennsylvania, and Hamilton, Ontario, was a bellwether for similar cities around the world.

Contemporary narratives of the decline of basic industry on both sides of the Atlantic make the postindustrial transformation of old manufacturing centers seem inevitable, the product of natural business cycles and neutral market forces. In Remaking the Rust Belt, Tracy Neumann tells a different story, one in which local political and business elites, drawing on a limited set of internationally circulating redevelopment models, pursued postindustrial urban visions. They hired the same consulting firms; shared ideas about urban revitalization on study tours, at conferences, and in the pages of professional journals; and began to plan cities oriented around services rather than manufacturing—all well in advance of the economic malaise of the 1970s.

While postindustrialism remade cities, it came with high costs. In following this strategy, public officials sacrificed the well-being of large portions of their populations. Remaking the Rust Belt recounts how local leaders throughout the Rust Belt created the jobs, services, leisure activities, and cultural institutions that they believed would attract younger, educated, middle-class professionals. In the process, they abandoned social democratic goals and widened and deepened economic inequality among urban residents.

"Remaking the Rust Belt is a powerful book which has much to offer, not just to historians of urban policy and political economy but also those seeking to understand the wider political, cultural and psephological shifts under way in the American industrial Northeast and Midwest."—History

"Remaking the Rust Belt is lucid, balanced, and engaging. Tracy Neumann's argument about the importance of place is compelling and well sustained."—Richard Harris, McMaster University

"Remaking the Rustbelt provides a welcome addition to the literature on the history of industrial policy and planning in North America. For Neumann, the 'Rustbelt' is as much a set of ideas and experiences as it is a place. Rejecting conventional narratives associated with terms like 'deindustrialization' and 'neoliberalism,' she tells a more complicated story of public officials and private interests acting across a variety of geographies and scales, sometimes in collusion, sometimes in conflict, always in tension. We see mayors, planners, economic development officers, corporate executives, labor leaders, and community activists grappling with the full range of problems that emerge from large-scale transformations in the global economy. In the end, Neumann demonstrates how the 'post-industrial' turn of the last fifty years was not simply the inevitable outcome of economic forces but, rather, a conscious production of a new social imaginary-a world in the making."—Joseph Heathcott, The New School