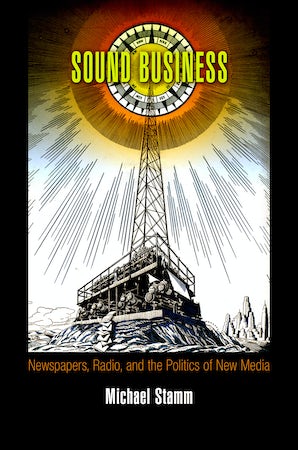 Newspapers, Radio, and the Politics of New Media

American newspapers have faced competition from new media for over ninety years. Today digital media challenge the printed word. In the 1920s, broadcast radio was the threatening upstart. At the time, newspaper publishers of all sizes turned threat into opportunity by establishing their own stations. Many, such as the Chicago Tribune's WGN, are still in operation. By 1940 newspapers owned 30 percent of America's radio stations. This new type of enterprise, the multimedia corporation, troubled those who feared its power to control the flow of news and information. In Sound Business, historian Michael Stamm traces how these corporations and their critics reshaped the ways Americans received the news.

Stamm is attuned to a neglected aspect of U.S. media history: the role newspaper owners played in communications from the dawn of radio to the rise of television. Drawing on a wide array of primary sources, he recounts the controversies surrounding joint newspaper and radio operations. These companies capitalized on synergies between print and broadcast production. As their advertising revenue grew, so did concern over their concentrated influence. Federal policymakers, especially during the New Deal, responded to widespread concerns about the consequences of media consolidation by seeking to limit and even ban cross ownership. The debates between corporations, policymakers, and critics over how to regulate these new kinds of media businesses ultimately structured the channels of information distribution in the United States and determined who would control the institutions undergirding American society and politics.

Sound Business is a timely examination of the connections between media ownership, content, and distribution, one that both expands our understanding of mid-twentieth-century America and offers lessons for the digital age.

Introduction: Underwriting the Ether: Newspapers and the Origins of American Broadcasting
1. Power, Politics, and the Promise of New Media: Newspaper Ownership of Radio in the 1920s
2. New Empires: Media Concentration in the 1930s
3. Reshaping the Public Sphere: The New Deal and Media Concentration
4. Reform Liberalism and the Media: The Federal Communications Commission's Newspaper-Radio Investigation
5. Media Corporations and the Critical Public: The Struggle over Ownership Diversity in Postwar Broadcasting
Conclusion: The Persistence of Print: Newspapers and Broadcasting in the Age of Television

"Sound Business is the absorbing account of the conversion of America's post-World War I newspaper business into the early multimedia conglomerates that form today's media giants. . . . Scholars and students alike will regard this exceptional history as a great addition to the literature on how new media intertwine with old to shape the current media landscape."—Journal of American History

"Stamm describes in superb detail the important but often overlooked and misunderstood relationship between the newspaper industry and the new medium of radio during an influential, anxious, and sometimes contentious time period for both."—Journal of Radio and Audio Media

"Sound Business: Newspapers, Radio, and the Politics of New Media is a well-researched contribution to American media and business history. . . . But more than that, it helps us better understand the intellectual and political contexts that have both enabled and constrained American choices about cross-media ownership."—Business History Review

"A fascinating, finely researched reconsideration of the newspaper industry's response to the advent of radio. Stamm has made a major contribution to mass media history."—James L. Baughman, author of Same Time, Same Station: Creating American Television, 1948-1961