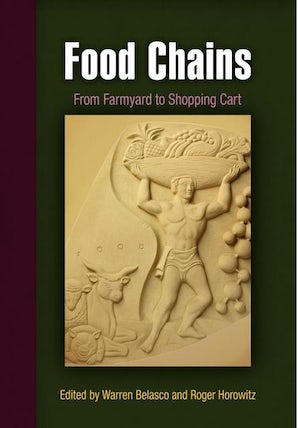 From Farmyard to Shopping Cart

In recent years, the integrity of food production and distribution has become an issue of wide social concern. The media frequently report on cases of food contamination as well as on the risks of hormones and cloning. Journalists, documentary filmmakers, and activists have had their say, but until now a survey of the latest research on the history of the modern food-provisioning system—the network that connects farms and fields to supermarkets and the dining table—has been unavailable. In Food Chains, Warren Belasco and Roger Horowitz present a collection of fascinating case studies that reveal the historical underpinnings and institutional arrangements that compose this system.

The dozen essays in Food Chains range widely in subject, from the pig, poultry, and seafood industries to the origins of the shopping cart. The book examines what it took to put ice in nineteenth-century refrigerators, why Soviet citizens could buy ice cream whenever they wanted, what made Mexican food popular in France, and why Americans turned to commercial pet food in place of table scraps for their dogs and cats. Food Chains goes behind the grocery shelves, explaining why Americans in the early twentieth century preferred to buy bread rather than make it and how Southerners learned to like self-serve shopping. Taken together, these essays demonstrate the value of a historical perspective on the modern food-provisioning system.

"Food Chains is a significant achievement, reflecting original work from a variety of disciplines and offering penetrating insights on the complex connections among the different components of food-supply chains."—Business History Review

"The essays in this book . . . help us to discover what we might learn from the past and identify what might aid us in interpreting our food provisioning system in the future."—Food and Foodways