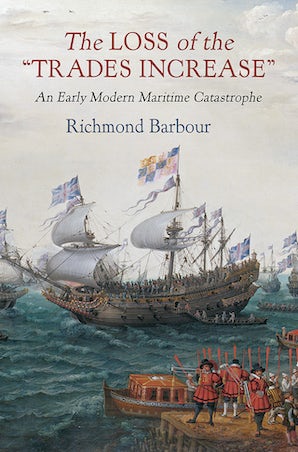 The Loss of the "Trades Increase"

Was it the Titanic of its age?

Christened by an optimistic King James I in December 1609, the Trades Increase was the greatest English merchant vessel of the Jacobean era—a magnificent ship embodying the hopes of the nascent East India Company to claim a commanding share of the Eastern trade. But the ship's launch failed when it proved too large to exit from its dock, an ill-fated start to an expedition that would end some three years later, when a dangerously leaking Trades Increase at last reached the shores of Java. While its smaller companion vessel would sail home with handsome profits for investors, the rotting hull of the great ship itself was beyond repair. The Trades Increase and nearly all who sailed it perished wretchedly on the far side of the world.

The terrible pattern proven by this voyage, with profits to an elite few in London stained by catastrophic losses in equipment and personnel abroad, ignited rancorous controversy in England over the human, moral, and economic costs of such commerce. In The Loss of the "Trades Increase" Richmond Barbour has written an engrossing account of the tragic expedition and of global capitalism at its hour of emergence.

Its sources fragmented among journals, minutes, and letters in the archives of the East India Company, the full story of the Trades Increase is told here for the first time. Earlier writers minimized the loss as a temporary setback and necessary sacrifice on the road to empire. In a work informed by corporate history and postcolonial theory, Barbour sees the saga of the voyage, and all that produced and justified it, differently: as an expression of the structural conflicts, operational risks, and material incapacities that haunted and ultimately unraveled the British Empire—and that destabilize multinational corporations, global markets, and our common biosphere to this day.

A Note on the Title

Introduction. The Charter Generation of the London East India Company

Chapter 1. The Construction and Launch of the Trades Increase, 1609

Chapter 2. From England to Arabia Felix

Chapter 4. To India and Back Again

"Richmond Barbour’s new monograph about the tragic story of the Jacobean merchant ship the Trades Increase performs a neat trick: it combines scrupulous archival research in early modern maritime and corporate history with contemporary relevance...[A] well-crafted study both of an important vessel for seventeenth-century maritime history and a significant expedition within British imperial history and travel writing studies. Clearly written and scholarly, the book is essential for all those interested in early modern trade and expansion and a cracking good read."—Renaissance and Reformation

"Richmond Barbour gives a fascinating account of the disastrous history of the Trades Increase, the largest ship in the British East India Company fleet and an embodiment of Jacobean England's hopes for trade and expansion. This is much more than a maritime disaster story; it is a cultural history, essential reading for an understanding of the development of early modern England."—Stephen Orgel, Stanford University

"Richmond Barbour has a real gift for characterization, and he's particularly good at bringing out the motives and emotions of the men whose often unhappy and conflict-ridden lives he narrates. The Loss of the 'Trades Increase' is valuable as much for the insight it gives into early modern mentalities as for the well-researched account it provides."—David J. Baker, University of North Carolina at Chapel Hill