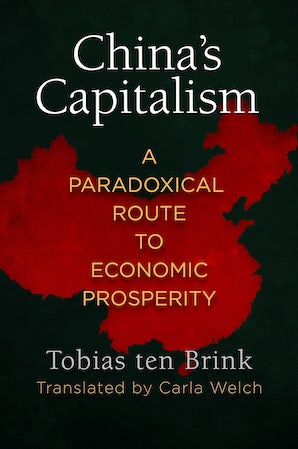 A Paradoxical Route to Economic Prosperity

Since 1978, the end of the Mao era, economic growth in China has outperformed every previous economic expansion in modern history. While the largest Western economies continue to struggle with the effects of the deepest recession since World War II, the People's Republic of China still enjoys growth rates that are massive in comparison. In the country's smog-choked cities, a chaotic climate of buying and selling prevails. Tireless expansion and inventiveness join forces with an attitude of national euphoria in which anything seems possible. No longer merely the "workshop of the world," China is poised to become a global engine for innovation.

In China's Capitalism, Tobias ten Brink considers the history of the socioeconomic order that has emerged in the People's Republic. With empirical evidence and a theoretical foundation based in comparative and international political economy, ten Brink analyzes the main characteristics of China's socioeconomic system over time, identifies the key dynamics shaping this system's structure, and discusses current trends in further capitalist development. He argues that hegemonic state-business alliances mostly at the local level, relative homogeneity of party-state elites, the maintenance of a low-wage regime, and unanticipated coincidences between domestic and global processes are the driving forces behind China's rise. He also surveys the limits to the state's influence over economic and social developments such as industrial overcapacity and social conflict.

Ten Brink's framework reveals how combinations of three heterogeneous actors—party-state institutions, firms, and workers—led to China's distinctive form of capitalism. Presenting a coherent and historically nuanced portrait, China's Capitalism is essential reading for anyone interested in the socioeconomic order of the People's Republic and the significant challenges facing its continuing development.

Chapter 2. From Mao to the Hu/Wen Era: The Origins and Trajectory of Capitalist-Driven Modernization

The Corporate Sector and Socioeconomic Dynamics
Planning for and with the Market(s): The Heterogeneous Party-State
The Limits of Chinese-Style Subordination? Developments in Labor Relations