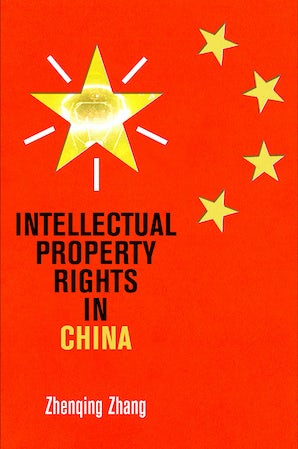 Over the past three decades, China has transformed itself from a stagnant, inward, centrally planned economy into an animated, outward-looking, decentralized market economy. Its rapid growth and trade surpluses have caused uneasiness in Western governments, which perceive this growth to be a result of China's rejection of international protocols that protect intellectual property and its widespread theft and replication of Western technology and products. China's major trading partners, particularly the United States, persistently criticize China for delivering, at best, half-hearted enforcement of intellectual property rights (IPR) norms. Despite these criticisms, Zhenqing Zhang argues that China does respect international intellectual property rights, but only in certain cases. In Intellectual Property Rights in China, Zhang addresses the variation in the effectiveness of China's IPR policy and explains the mechanisms for the uneven compliance with global IPR norms.

Covering the areas of patent, copyright, and trademark, Zhang chronicles how Chinese IPR policy has evolved within the legacy of a planned economy and an immature market mechanism. In this environment, compliance with IPR norms is the result of balancing two factors: the need for short-term economic gains that depend on violating others' IPR and the aspirations for long-term sustained growth that requires respecting others' IPR. In case studies grounded in theoretical analysis as well as interviews and fieldwork, Zhang demonstrates how advocates for IPR, typically cutting-edge Chinese companies and foreign IPR holders, can be strong enough to persuade government officials to comply with IPR norms to achieve the country's long-term economic development goals. Conversely, he reveals the ways in which local governments protect IPR infringers because of their own political interests in raising tax revenues and creating jobs.

The book offers a meaningful contribution to the understanding of IPRs through a historical lens that encompasses both a macro and a micro perspective of the political economy of IPRs in China. [A] dynamic portrayal of modern Chinese history.

"Intellectual Property Rights in China presents a well-constructed combination of data, personal recollection, and source material to produce a compelling narrative as well as a historically and politically grounded account of the development of Chinese law regarding intellectual property."—Christopher May, Lancaster University

"Zhenqing Zhang's holistic approach to China's intellectual property rights policy reveals nuances that a merely state-centric treatment would have missed. His thorough examination of the policy's evolution as well as his abundant collection of interviews makes this book an unparalleled resource for both scholars and policymakers."—Wentong Zheng, University of Florida