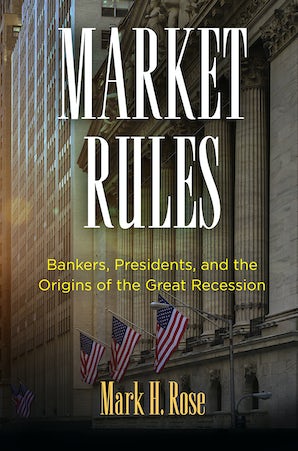 Bankers, Presidents, and the Origins of the Great Recession

Although most Americans attribute shifting practices in the financial industry to the invisible hand of the market, Mark H. Rose reveals the degree to which presidents, legislators, regulators, and even bankers themselves have long taken an active interest in regulating the industry.

In 1971, members of Richard Nixon's Commission on Financial Structure and Regulation described the banks they sought to create as "supermarkets." Analogous to the twentieth-century model of a store at which Americans could buy everything from soft drinks to fresh produce, supermarket banks would accept deposits, make loans, sell insurance, guide mergers and acquisitions, and underwrite stock and bond issues. The supermarket bank presented a radical departure from the financial industry as it stood, composed as it was of local savings and loans, commercial banks, investment banks, mutual funds, and insurance firms. Over the next four decades, through a process Rose describes as "grinding politics," supermarket banks became the guiding model of the financial industry. As the banking industry consolidated, it grew too large while remaining too fragmented and unwieldy for politicians to regulate and for regulators to understand—until, in 2008, those supermarket banks, such as Citigroup, needed federal help to survive and prosper once again.

Rose explains the history of the financial industry as a story of individuals—some well-known, like Presidents Kennedy, Carter, Reagan, and Clinton; Treasury Secretaries Donald Regan and Timothy Geithner; and JP Morgan CEO Jamie Dimon; and some less so, though equally influential, such as Kennedy's Comptroller of the Currency James J. Saxon, Citicorp CEO Walter Wriston, and Bank of America CEOs Hugh McColl and Kenneth Lewis. Rose traces the evolution of supermarket banks from the early days of the Kennedy administration, through the financial crisis of 2008, and up to the Trump administration's attempts to modify bank rules. Deeply researched and accessibly written, Market Rules demystifies the major trends in the banking industry and brings financial policy to life.

Preface
Introduction. Politics and the Markets They Made

Epilogue. Another Round of Bank Politics

"Rose utilizes a sure grasp of regulatory issues, a command of interdisciplinary literature, the fruits of deep archival research, and the ability to craft political narratives and biographical sketches. Market Rules is, without doubt, the best book we have on the history of the regulation of commercial banking from the 1960s to 1999."—The Journal of American History

"Mark Rose has written a lively and lucid account of banking and financial history over the past half century, laying out the grand ambitions and rivalries of leading bankers and policymakers like Walter Wriston, Donald T. Regan, and Sandy Weill-and the changing strategies for delivering economic growth led by presidents Kennedy, Reagan, and Obama. Market Rules relates the history of today's massive multipurpose banks, the 2008 crisis, and its aftermath to broader trends in American society and life from the 1960s to the present. It is a great achievement."—Walter Friedman, Harvard Business School

"Compared to half a century ago, America has many fewer and much larger banks. Mark Rose's engaging study shows that this was far from a market outcome. It was a product of bank politics: entrepreneurial bankers persuaded U.S. presidents and regulators that ever-larger, less regulated 'supermarket' banks were more efficient, more stable, and thus more growth-promoting. The actual outcome-financial crisis, the Great Recession, and slower growth-lead Rose to suggest that, in banking, political clout trumped economic efficiency."—Richard Sylla, New York University

"Mark Rose's engaging study follows a group of men, who, over successive presidential administrations, helped transform the landscape of American banking in the late twentieth century. Rose makes a compelling argument that the history of American banking is a fundamentally political one. In its focus on politics and people at the center of banking, Market Rules offers a unique voice."—Susie Pak, St. John's University