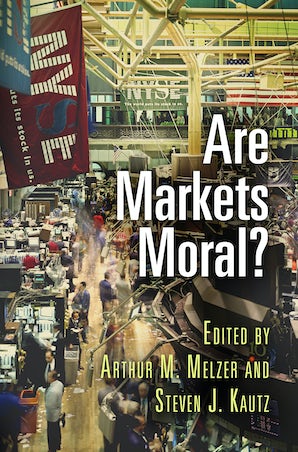 Despite the remarkable achievements of free markets—their rapid spread around the world and success at generating economic growth—they tend to elicit anxiety. Creative destruction and destabilizing change provoke feelings of powerlessness in the face of circumstances that portend inevitable catastrophe. Thus, from the beginning, capitalism has been particularly stimulative for the growth of critics and doomsayers. While early analysts such as Karl Marx primarily emphasized an impending economic disaster, in recent years the economic critique of capitalism has receded in favor of moral and environmental concerns.

At the heart of this collection of original essays lies the question: does morality demand that we adopt a primarily supportive or critical stance toward capitalism? Some contributors suggest that the foundational principles of the capitalist system may be at odds with the central requirements of morality, while others wonder whether the practical workings of markets slowly erode moral character or hinder the just distribution of goods. Still others consider whether morality itself does not demand the economic freedom constitutive of the capitalist system. The essays in Are Markets Moral? represent a broad array of disciplines, from economics to philosophy to law, and place particular emphasis on the experiences of non-Western countries where the latest chapters in capitalism's history are now being written.

"Arthur M. Melzer and Steven J. Kautz’s timely and essential collection Are Markets Moral? investigates the morality of markets...a rare book with writings from some of the top thinkers in this field. Melzer and Kautz have successfully assembled a group of thought-provoking scholars who are deeply concerned about the state of our moral souls in a market society."—The Independent Revieew

"A unique collection of essays on morality and the market: no other volume I know of gathers as many different voices or as many concerns with non-Western economies."—Samuel Fleischacker, University of Illinois at Chicago

"Are Markets Moral? is a welcome project of interest not only to scholars and students in fields such as political science, philosophy, business, economics, and law but also to any reader interested in the relationship between capitalism and morality."—Ryan Patrick Hanley, Marquette University