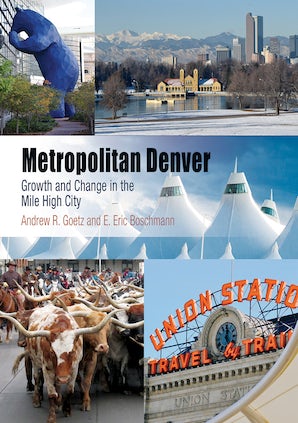 Growth and Change in the Mile High City

Nestled between the Rocky Mountains to the west and the High Plains to the east, Denver, Colorado, is nicknamed the Mile High City because its official elevation is exactly one mile above sea level. Over the past ten years, it has also been one of the country's fastest-growing metropolitan areas. In Denver's early days, its geographic proximity to the mineral-rich mountains attracted miners, and gold and silver booms and busts played a large role in its economic success. Today, its central location—between the west and east coasts and between major cities of the Midwest—makes it a key node for the distribution of goods and services as well as an optimal site for federal agencies and telecommunications companies.

In Metropolitan Denver, Andrew R. Goetz and E. Eric Boschmann show how the city evolved from its origins as a mining town into a cosmopolitan metropolis. They chart the foundations of Denver's recent economic development—from mining and agriculture to energy, defense, and technology—and examine the challenges engendered by a postwar population explosion that led to increasing income inequality and rapid growth in the number of Latino residents. Highlighting the risks and rewards of regional collaboration in municipal governance, Goetz and Boschmann recount public works projects such as the construction of the Denver International Airport and explore the smart growth movement that shifted development from postwar low-density, automobile-based, suburban and exurban sprawl to higher-density, mixed use, transit-oriented urban centers.

Because of its proximity to the mountains and generally sunny weather, Denver has a reputation as a very active, outdoor-oriented city and a desirable place to live and work. Metropolitan Denver reveals the purposeful civic decisions made regarding tourism, downtown urban revitalization, and cultural-led economic development that make the city a destination.

"This is book is a classic geography, presented topically, that addresses the physical environment and human geography of Denver, Colorado, from its founding to the present…[It] contains a wealth of knowledge about city planning processes and how these relate to Denver…[and] is valuable for its careful survey of the growth and planning of an important city of the US Mountain West and for what policy makers in and outside the academy might learn from it."—Historical Geography