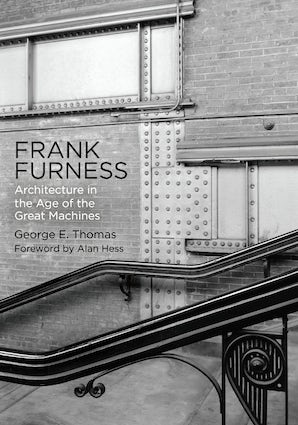 Architecture in the Age of the Great Machines

Frank Furness (1839-1912) has remained a curiosity to architectural historians and critics, somewhere between an icon and an enigma, whose importance and impact have yet to be properly evaluated or appreciated. To some, his work pushed pattern and proportion to extremes, undermining or forcing together the historic styles he referenced in such eclectic buildings as the Pennsylvania Academy of the Fine Arts and the University of Pennsylvania Library. To others, he was merely a regional mannerist creating an eccentric personal style that had little resonance and modest influence on the future of architecture. By placing Furness in the industrial culture that supported his work, George Thomas finds a cutting-edge revolutionary who launched the beginnings of modern design, played a key part in its evolution, and whose strategies continue to affect the built world.

In his sweeping reassessment of Furness as an architect of the machine age, Thomas grounds him in Philadelphia, a city led by engineers, industrialists, and businessmen who commissioned the buildings that extended modern design to Chicago, Glasgow, and Berlin. Thomas examines the multiple facets of Victorian Philadelphia's modernity, looking to its eager embrace of innovations in engineering, transportation, technology, and building, and argues that Furness, working for a particular cohort of clients, played a central role in shaping this context. His analyses of the innovative planning, formal, and structural qualities of Furness's major buildings identifies their designs as initiators of a narrative that leads to such more obviously modern figures as Louis Sullivan, William Price, Frank Lloyd Wright and eventually, the architects of the Bauhaus.

Misunderstood and reviled in the traditional architectural centers of New York and Boston, Furness's projects, commissioned by the progressive industrialists of the new machine age, intentionally broke with the historical styles of the past to work in a modern way—from utilizing principles based on logistical planning to incorporating the new materials of the industrial age. Lavishly illustrated, the book includes more than eighty black-and-white and thirty color photographs that highlight the richness of his work and the originality of his design spanning more than forty years.

"[A] brilliant study by the architectural and cultural historian George E. Thomas, who contends that the unprecedented mechanization of the Victorian Era was central to the advance of architecture . . . Thomas further secures his reputation as our leading authority on the architect, and places his subject squarely in a social setting too often missing when researchers obsess over stylistic and formal matters . . . [H]alf a century after the rediscovery of the fiery Furness, the impassioned advocacy of George Thomas continues to reveal the genius of this magnificent misfit.""—The New York Review of Books

"Through his examination of Furness, Thomas provides an important reminder of the narrowness of the existing historiography of American architecture (as opposed to that of modern architecture more broadly), which continues to draw on a limited cast of characters and locales . . . >Frank Furnessshould provide us with incentive to rediscover the architects and cities that together created a more complex and nuanced architectural and historical landscape."—Journal of the Society of Architectural Historians

"George Thomas' book is a useful corrective to [Furness'] popular image. His Furness is not a rogue architect, but a product of the distinctive culture of Philadelphia architecture . . . [An] original and imaginative study of architectural patronage, which significantly enhances our understanding of Furness, of Philadelphia, and of American architecture."—Pennsylvania Heritage

"Frank Furness's architecture brought together two seemingly opposed realms: one derived from the newly developing industrial machine, the other from nature. There is a fantastical juxtaposition of ferocious hissing, steam-driven piston power coupled with lyrically delicate ornament derived from leaves and stems of plant life (and, almost paradoxically, implanted in stone by the then newly invented steam-powered chisel). George Thomas's book places Furness's architecture in the apocalyptic climax of this moment when nature and industry could be thought of as one organic, dynamic whole."—Turner Brooks, Yale School of Architecture

"By returning Frank Furness to his central position at the birth of Modern architecture in America, George Thomas helps us understand the depth of the American roots of Modernism . . . [and] reminds us of how many significant turning points occurred when insights into contemporary life, culture, and technology became a spring board for creative design. His Modernism-and Frank Furness's-is not merely a theory but a mirror held up to society."—Alan Hess, from the Foreword