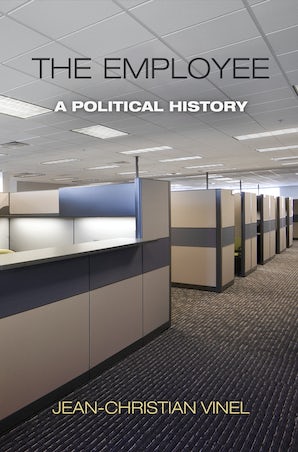 A political, legal, intellectual, and social history of employment in America

In the present age of temp work, telecommuting, and outsourcing, millions of workers in the United States find themselves excluded from the category of "employee"—a crucial distinction that would otherwise permit unionization and collective bargaining. Tracing the history of the term since its entry into the public lexicon in the nineteenth century, Jean-Christian Vinel demonstrates that the legal definition of "employee" has always been politically contested and deeply affected by competing claims on the part of business and labor. Unique in the Western world, American labor law is premised on the notion that "no man can serve two masters"—workers owe loyalty to their employer, which in many cases is incompatible with union membership.

The Employee: A Political History historicizes this American exception to international standards of rights and liberties at work, revealing a little known part of the business struggle against the New Deal. Early on, progressives and liberals developed a labor regime that, intending to restore amicable relations between employer and employee, sought to include as many workers as possible in the latter category. But in the 1940s this language of social harmony met with increasing resistance from businessmen, who pressed their interests in Congress and the federal courts, pushing for an ever-narrower definition of "employee" that excluded groups such as foremen, supervisors, and knowledge workers. A cultural and political history of American business and law, The Employee sheds historical light on contemporary struggles for economic democracy and political power in the workplace.

PART I. THE STRUGGLE FOR HARMONY
Chapter 1. The "Employé"
Chapter 2. Struggling Against Class
Chapter 3. The Sociology of Harmony

PART II. THE BATTLE FOR LOYALTY
Chapter 4. Is a Foreman a Worker?
Chapter 5. The Other Side of Industrial Pluralism
Chapter 6. Loyalty Ascendant
Chapter 7. The Wages of Textualism

"The Employee is a welcome and much appreciated addition to the historical literature on work, workers, and the law. It boldly underscores the need to reform labor laws in the interest of the American people."—American Historical Review

"Vinel has created an engaging and illuminating account of how employees have been defined in the United States. . . . The Employee represents a significant contribution to our understanding of labor and legal history and the longstanding battles that have raged over the efforts to build democracy in the American workplace. As such, it is a welcome addition for anyone wanting to tell a more nuanced story about labor in the United States."—Labor Studies Journal

"As New Deal labor protections grow increasingly anachronistic and relations between workers and employers become more tenuous and unbalanced, Jean-Christian Vinel offers a startlingly original narrative explaining this shift. With painstaking research and shrewd insight, Vinel reveals an untold story: how more than a century of struggle over what it means to be an 'employee' has disempowered American workers. Anyone interested in the past and future of labor simply must read this fascinating book."—Joseph A. McCartin, author of Collision Course: Ronald Reagan, the Air Traffic Controllers, and the Strike That Changed America

"The Employee is a sensationally good book that combines labor history, sociological analysis, and legal history, all the while keeping the larger story of American liberalism, management practice, and the history of ideas in the near background. Vinel's book is extraordinarily timely because in the twenty-first century, as never before, the entire world of work is undergoing such a radical and profound transformation."—Nelson Lichtenstein, author of State of the Union: A Century of American Labor

"In this brilliant new book, Jean-Christian Vinel traces the origins of the blurry and shifting lines surrounding the legal category of the 'employee' and asks why democratic rights in the workplace have been denied to over ten million workers. Ranging from the Progressive Era to the recent effort to amend federal labor law through the RESPECT Act and gathering insight from both sides of the Atlantic, this book is essential reading for anyone who believes U.S. labor law must be refashioned to fit a new economy."—Craig Becker, General Counsel, AFL-CIO