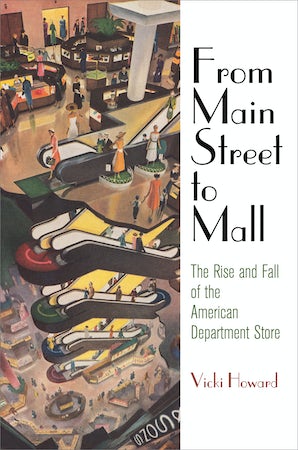 From Main Street to Mall

The Rise and Fall of the American Department Store

The geography of American retail has changed dramatically since the first luxurious department stores sprang up in nineteenth-century cities. Introducing light, color, and music to dry-goods emporia, these "palaces of consumption" transformed mere trade into occasions for pleasure and spectacle. Through the early twentieth century, department stores remained centers of social activity in local communities. But after World War II, suburban growth and the ubiquity of automobiles shifted the seat of economic prosperity to malls and shopping centers. The subsequent rise of discount big-box stores and electronic shopping accelerated the pace at which local department stores were shuttered or absorbed by national chains. But as the outpouring of nostalgia for lost downtown stores and historic shopping districts would indicate, these vibrant social institutions were intimately connected to American political, cultural, and economic identities.

The first national study of the department store industry, From Main Street to Mall traces the changing economic and political contexts that transformed the American shopping experience in the twentieth century. With careful attention to small-town stores as well as glamorous landmarks such as Marshall Field's in Chicago and Wanamaker's in Philadelphia, historian Vicki Howard offers a comprehensive account of the uneven trajectory that brought about the loss of locally identified department store firms and the rise of national chains like Macy's and J. C. Penney. She draws on a wealth of primary source evidence to demonstrate how the decisions of consumers, government policy makers, and department store industry leaders culminated in today's Wal-Mart world. Richly illustrated with archival photographs of the nation's beloved downtown business centers, From Main Street to Mall shows that department stores were more than just places to shop.

"Howard's book is essential reading. . . . From Main Street to Mall makes a significant contribution to our knowledge of retailing and of business more broadly in the U.S."—American Historical Review

"From Main Street to Mall is an important, insightful, and informative work that succeeds in charting and analysing the rise and fall of the department store and how this process was mediated by interactions between the department store industry, other business interests, local and national politics, and wider long-term changes in American society. This [could] serve as the standard U.S. reference work on this sector for many years."—Economic History Review

"Howard's book is a highly valuable complement to the current body of literature on department stores . . . Rather than acquiescing to the commonly accepted inevitability of market forces leading to the decline of department stores, Howard traces the various private and public actors and political processes that have consciously contributed to their decline."—Journal of Urban Affairs

"From Main Street to Mall is a welcome and excellent addition to the literature on mass retailing in the United States."—Business History Review

"From Main Street to Mall succeeds admirably in providing a rich history of the US department store, synthesising various perspectives-social, economic and political-to produce a highly readable account of its development and decline."—Consumption Markets & Culture

"From Main Street to Mall offers sharp analysis of American retailing from a new vantage point, advancing our understanding of the department store beyond Macy's and Marshall Field's. Historians of consumer culture have always known of smaller stores in smaller cities, but nobody paid attention to them until Vicki Howard. A significant contribution."—Susan Strasser, author of Satisfaction Guaranteed: The Making of the American Mass Market

"Combining deep historical research and vivid description, Vicki Howard lucidly explains how, when, and why the department store came to dominate American commercial culture and how the democratization of consumption, changing public policy, and the forces of globalization contributed to its transformation and demise. A must-read for researchers of American consumer culture and for anyone who loves to shop."—Regina Lee Blaszczyk, author of The Color Revolution