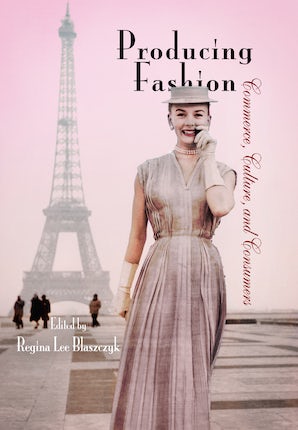 How has Paris, the world's fashion capital, influenced Milan, New York, and Tokyo? When did the Marlboro Man become a symbol of American masculinity? Why do Americans love to dress down in high-tech Lycra fabrics, while they wax nostalgic for quaint, old-fashioned Victorian cottages?

Fashion icons and failures have long captivated the general public, but few scholars have examined the historical role of business and commerce in creating the international market for style goods. Producing Fashion is a groundbreaking collection of original essays that shows how economic institutions in Europe and North America laid the foundation for the global fashion system and sustained it commercially through the mechanisms of advertising, licensing, marketing, publishing, and retailing.

Producing Fashion looks to the past, revealing the rationale behind style choices, while explaining how the interplay of custom, invented traditions, and sales imperatives continue to drive innovation in the fashion industries.

"Producing Fashion takes readers on an international journey that acknowledges the preeminence of Paris haute couture but also includes stops in Russia, Italy, Belgium, Austria, Hungary, and the United States. The case studies, based on new original research, demonstrate the interplay between business enterprise and fashion."—Journal of American History

"Producing Fashion demonstrates the importance of studying fashion, very broadly defined, from the perspective of business history. Case studies from several countries and from various periods during the nineteenth and twentieth centuries show how 'fashion intermediaries' in the business world developed new products and styles that resonated with consumers. Combining historical methods with models from cultural studies and other social science disciplines, these studies provide new insights into the environments that facilitated product innovation, the dissemination of ideas in the marketplace, and factors leading to cooperation or resistance on the part of consumers."—Diana Crane, University of Pennsylvania

"At last, a collection of essays that considers fashion as both a commercial and a cultural phenomenon. Informed by recent approaches in the fields of business history, material culture studies, and the history of design, Producing Fashion offers a stimulating series of case studies that range from fashion magazines in Tzarist Russia to questions of taste in the contemporary American home. Anyone who has ever considered how and why fashionable trends emerge will find something of interest in its pages."—Christopher Breward, Victoria and Albert Museum, London