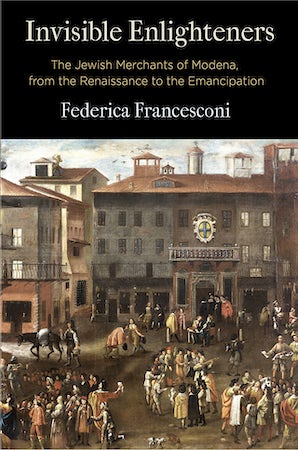 The Jewish Merchants of Modena, from the Renaissance to the Emancipation

Federica Francesconi writes the history of the Jewish merchants who lived and prospered in the northern Italian city of Modena, capital city of the Este Duchy, during the seventeenth and eighteenth centuries. Her protagonists are men and women who stood out within their communities but who, despite their cultural and economic prominence, were ghettoized after 1638. Their sociocultural transformation and eventual legal and political integration evolved through a complex dialogue between their Italian and Jewish identities, and without the traumatic ruptures or dramatic divides that led to the assimilation and conversion of many Jews elsewhere in Europe.

In Modena, male and female Jewish identities were contoured by both cultural developments internal to the community and engagement with the broader society. The study of Lurianic and Cordoverian Kabbalah, liturgical and nondevotional Hebrew poetry, and Sabbateanism existed alongside interactions with Jesuits, converts, and inquisitors. If Modenese Jewish merchants were absent from the public discourse of the Estes, their businesses lives were nevertheless located at the very geographical and economic center of the city. They lived in an environment that gave rise to unique forms of Renaissance culture, early modern female agency, and Enlightenment practice. New Jewish ways of performing gender emerged in the seventeenth century, giving rise to what could be called an entrepreneurial female community devoted to assisting, employing, and socializing in the ghetto. Indeed, the ghetto leadership prepared both Jewish men and women for the political and legal emancipation they would eventually obtain under Napoleon. It was the cultured Modenese merchants who combined active participation in the political struggle for Italian Jewish emancipation with the creation of a special form of the Enlightenment embedded in scholarly and French-oriented lay culture that emerged within the European context.

Note on Spelling, Translations, and Currency

Introduction
Chapter 1. A Network of Jewish Families in the Early Modern Period: The Road Toward Ghettoization
Chapter 2. Jewish Leaders, Their Circles, and Their Books Before the Inquisition: A Parallel Story
Chapter 3. The Jewish Household: Family Networks, Social Control, and Gendered Spaces
Chapter 4. The "Invisible" Wealth of Silver: The Journey of the Formigginis from the Ghetto to the Ducal Court
Chapter 5. Jewish Female Agency in the Ghetto Mercantile Elite
Chapter 6. The Jewish Urban Geography of the Ghetto and Beyond
Chapter 7. Moisè Formiggini Before Napoleon: Two Steps Toward Emancipation and One Step Back

"The title of the book is ambitious but precise. It traces the cultural and social history of the Jews of Modena under the rule of the dukes of Este from the expulsion of the Jews from Spain in 1492 to the Napoleonic invasion in 1796, with the focal point being the establishment of the ghetto in 1638. In creating an eloquent and cohesive narrative, Federica Francesconi draws on Modenese archival and Inquisitional sources as well as contemporaneous Hebrew documents… [A]n important contribution to tracing a representative but distinctive Italian Jewish community in the transition from the medieval to the modern period."—Renaissance and Reformation

"In this meticulously researched book, Federica Francesconi focuses on the mercantile Jewish elites of Modena to complicate our understanding of the modernity and integration of Jews in European society, a subject that has for too long been dominated in historiography by the study of the German Jewish context."—Magda Teter, Fordham University