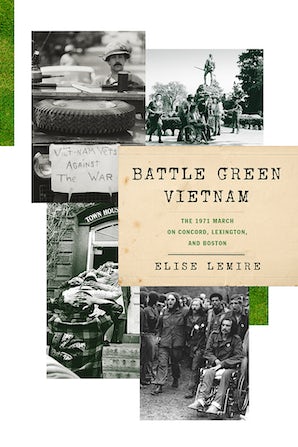 The 1971 March on Concord, Lexington, and Boston

In the spring of 1971, the largest mass arrest in Massachusetts history unfolded at a site nationally celebrated as the birthplace of freedom and democracy. With peace efforts at a standstill, the New England chapter of Vietnam Veterans Against the War had organized an event to rouse public support for their cause. Over the course of the long Memorial Day weekend, a band of more than two hundred young, fatigue-clad veterans sounded the alarm for peace and patriotism by marching—in reverse—the path Paul Revere had taken two centuries earlier when he called on the American colonists to rise against their British oppressors.

Enacting the parts of colonial militiamen, the veterans set off in patrol formation along the famed Battle Road, a route calculated to take them past Concord's Old North Bridge, onto Lexington's Battle Green, and up to Bunker Hill. Determined to reanimate the patriotic sentiments expressed by the area's many Revolutionary War memorials, they revealed how far the nation had veered from its ideals by staging reenactments of the brutal atrocities they had witnessed and perpetrated in the name of freedom on the other side of the world. "With an ironic twist," the fliers they distributed explained, "our presence in Indochina as viewed by a native of an occupied village easily coincides with the British army in America." To the selectmen of the town of Lexington who ordered their mass arrest, the veterans were defiling spaces sacred to the nation's Revolutionary past; to the hundreds of bystanders who fed, sheltered, and committed civil disobedience with them, they were an inspiration.

Elise Lemire tells this extraordinary story from the perspective of six men who played central roles in the events of May 1971. Based on more than one hundred interviews with participants and accompanied by nearly forty photographs and maps, Battle Green Vietnam demonstrates the power of mobilizing history, myth, and memorials to effect revolutionary change.

"Readers who protested the war in Vietnam will appreciate the unearthing of a noteworthy yet little-known event, while younger activists will draw inspiration from the example of a 'breathtakingly creative protest march.' This well-told deep dive packs in plenty of rewards."—Publishers Weekly

"[A] thrilling story of patriotism and dissent....Battle Green Vietnam is a great book, highlighting an event that should be better known and remembered by students of history...Lemire brings the story of the march vividly to life."—Discover Concord

With this volume, Lemire has eloquently captured the spirt and practice of VVAW, an organization whose history has much that is important and relevant for today...[T]his eminently readable book would be excellent for course adoptions and would interest anyone wanting to learn about how place and performance are employed by social activists.

"The brilliance of Vietnam Veterans against the War’s (VVAW) political performance is captured by Lemire through photographs, newspaper archives, and oral histories. She tells how the Lexington authorities denied VVAW space on the Green and how the 100 veterans rallied hundreds more residents to their cause. Each of her six core chapters introduces an individual VVAW organizer or Lexington activist. The chapters, written as parallel histories of the Paul Revere legend and the VVAW action, are a walk through history as readers witness historical memory in the making."—Choice

"Elise Lemire’s Battle Green Vietnam offers a thorough accounting of [a] regional protest, Operation POW—a multipronged march organized by VVAW’s New England chapter (VVAW-NE) over the 1971 Memorial Day weekend..Lemire is a gifted writer with keen insights. At her best, she illustrates the symbolic weight VVAW brought to its protests and its deft deployment of creative performance in service of peace."—Peace & Change

"Battle Green Vietnam is an excellent read for those looking to broaden their knowledge of the antiwar movement in the United States….This is a must-read for modern-day activists and the future generation of change-makers."—Journal of Military History

"[A] sharp analysis...Battle Green Vietnam is a lucid and well-researched study that should be read by scholars of the Vietnam War and America’s history in the post-WWII era."—Society for U.S. Intellectual History

"Elise Lemire focuses on one of the most interesting protests in the latter years of the U.S.'s engagement in its war in Southeast Asia, when using the hallowed sacred spaces of the martial birthplace of the nation, a group of Vietnam vets sought to contrast what they understood as a disastrous, criminal war with what they understood as the founding principles of the nation."—Edward Linenthal, author of Sacred Ground: Americans and Their Battlefields

"Battle Green Vietnam is a vital piece of America's national history, written with passion and care."—Gerald Nicosia, author of Home to War: A History of the Vietnam Veterans' Movement

"Lemire offers a citizen's handbook on the importance of active participation in our democracy to keep it alive for future generations."—The Hon. John Kerry

"Powerful and beautifully written, this is one of the most important books to come out of the Vietnam War."—Ron Kovic, author of Born on the Fourth of July