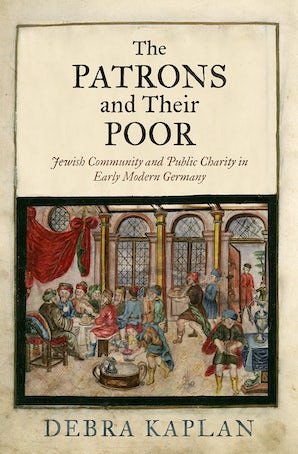 The Patrons and Their Poor

A pregnant mother, a teacher who had fallen ill, a thirty-year-old homeless thief, refugees from war-torn communities, orphans, widows, the mentally disabled and domestic servants. What this diverse group of individuals—mentioned in a wide range of manuscript and print sources in German, Hebrew, and Yiddish—had in common was their appeal to early modern Jewish communities for aid. Poor relief administrators, confronted with multiple requests and a finite communal budget, were forced to decide who would receive support and how much, and who would not. Then as now, observes Debra Kaplan, public charity tells us about both donors and recipients, revealing the values, perceptions, roles in society, and the dynamics of power that existed between those who gave and those who received.

In The Patrons and Their Poor, Kaplan offers the first extensive analysis of Jewish poor relief in early modern German cities and towns, focusing on three major urban Ashkenazic Jewish communities from the Western part of the Holy Roman Empire: Altona-Hamburg-Wandsbek, Frankfurt am Main, and Worms. She demonstrates how Jewish charitable institutions became increasingly formalized as Jewish authorities faced a growing number of people seeking aid amid limited resources. Kaplan explores the intersections between various sectors of the population, from wealthy patrons to the homeless and stateless poor, providing an intimate portrait of the early modern Ashkenazic community.

Note on Currencies and Translations
Introduction

"The Patrons and Their Poor fits within new methodological directions, analyzing theregisters ofJewish communities and philanthropic organizations compiled in Germany during the seventeenth century...Kaplan’s study is an important book that adds to our knowledge of the complexity of early modern social structures."—H-Judaic

"The Patrons and Their Poor is a truly outstanding work of meticulous scholarship. Analyzing the range of communal policies pertaining to poor relief and the norms of charitable giving at the individual level, Debra Kaplan presents an excellent, comprehensive history of charity as practiced in early modern Germany."—Jay R. Berkovitz, University of Massachusetts Amherst