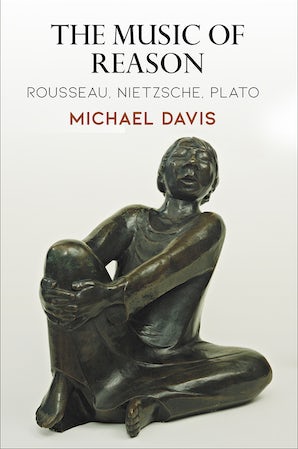 The Music of Reason

In recent years, the field of cognitive psychology has begun to explore the rootedness of rational thinking in subrational inspiration, insight, or instinct—a kind of prediscursive hunch that leaps ahead and guides rational thought before the reasoning human being is even aware of it. In The Music of Reason, Michael Davis shows that this "musical" quality of thinking is something that leading philosophers have long been aware of and explored with great depth and subtlety. Focusing on the work of three thinkers traditionally viewed as among the most poetic of philosophers—Rousseau, Nietzsche, and Plato—Davis reveals the complex and profound ways in which they each plumbed the depths of reason's "prerational" foundations.

Davis first examines Rousseau's Essay on the Origins of Languages: Where Something Is Said About Melody and Musical Imitation and Nietzsche's The Birth of Tragedy Out of the Spirit of Music to demonstrate that revealing the truth, or achieving individual enlightenment, requires poetic techniques such as irony, indirection, and ambiguity. How philosophers say things is as worthy of our attention as what they say. Turning to Plato's Lesser Hippias, Davis then reconsiders the relation between truth-telling and lying, finding the Platonic dialogue to be an artful synthesis of music and reason.

The "ancient quarrel between philosophy and poetry" that Plato placed near the core of this thinking suggests a tension between the rational (scientific) and the nonrational (poetic), or between the true and the beautiful—the one clear and definite, the other allusive and musical. Contemplating language in Rousseau, the Dionysian in Nietzsche, and playfulness in Plato, The Music of Reason explores how what we might initially perceive as irrational and so antithetical to reason is, in fact, constitutive of it.

"[A] rigorous and delightful work. Every page resounds with enthusing insights and startling puzzles, to which the author's humor adds both color and depth."—Polis

"Davis offers insightful readings of these philosophers’ views on the music of reason. Those readings expand our understandings of Rousseau, Nietzsche, and Plato by elucidating their less familiar writings. They also recast the role of reason in politics by revealing its deeper, elusive foundations in musical experience."—Perspectives on Politics

Davis seeks to illuminat[e] the ways in which the rational aspects of human nature (e.g., language, science, and philosophy) depend on the nonrational or musical (e.g., melody, art, and poetry)...The Music of Reason is a wonderful book, overflowing with insights and inspiration, which must be read to be fully appreciated.

"Davis is an established scholar who has developed a distinctive voice. Unlike many professional philosophers, Davis does not write into or about controversies in the scholarly literature. He writes for a broader, wider audience of readers concerned about the character of learning, reason, human communication, and living well . . . As in The Music of Reason, however, Davis roots in argument in a careful analysis of a particular text or texts. He is truly an original thinker whose writings deserve more attention than they have yet received."—The Montreal Review

"The Music of Reason is beautifully written and lucidly argued. Michael Davis is truly an original thinker who leads readers to understand what philosophy is, not by merely describing it or its results but by inviting them to engage in it along with him."—Catherine Zuckert, University of Notre Dame

"In The Music of Reason, Michael Davis offers a set of closely related essays that uncover philosophic themes linking apparently very disparate authors. Employing great learning, careful and subtle exegesis, and intuitive insight, he shows not only that Rousseau, Nietzsche, and Plato illuminate the subject of music but also that they are masters in the practice of the musical-poetic presentation of philosophy."—Richard Velkley, Tulane University