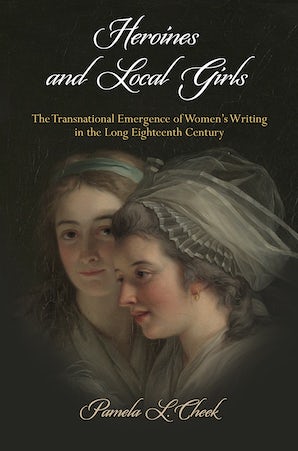 The Transnational Emergence of Women's Writing in the Long Eighteenth Century

Over the course of the long eighteenth century, a network of some fifty women writers, working in French, English, Dutch, and German, staked out a lasting position in the European literary field. These writers were multilingual and lived for many years outside of their countries of origin, translated and borrowed from each others' works, attended literary circles and salons, and fashioned a transnational women's literature characterized by highly recognizable codes. Drawing on a literary geography of national types, women writers across Western Europe read, translated, wrote, and rewrote stories about exceptional young women, literary heroines who transcend the gendered destiny of their distinctive cultural and national contexts. These transcultural heroines struggle against the cultural constraints determining the sexualized fates of local girls.

In Heroines and Local Girls, Pamela L. Cheek explores the rise of women's writing as a distinct, transnational category in Britain and Europe between 1650 and 1810. Starting with an account of a remarkable tea party that brought together Frances Burney, Sophie von La Roche, and Marie Elisabeth de La Fite in conversation about Stéphanie de Genlis, she excavates a complex community of European and British women authors. In chapters that incorporate history, network theory, and feminist literary history, she examines the century-and-a-half literary lineage connecting Madame de Maintenon to Mary Wollstonecraft, including Charlotte Lennox and Françoise de Graffigny and their radical responses to sexual violence. Neither simply a reaction to, nor collusion with, patriarchal and national literary forms but, rather, both, women's writing offered an invitation to group membership through a literary project of self-transformation. In so doing, argues Cheek, women's writing was the first modern literary category to capitalize transnationally on the virtue of identity, anticipating the global literary marketplace's segmentation of affinity-based reading publics, and continuing to define women's writing to this day.

Chapter 1. Networks of Women Writers Circa 1785-87
Chapter 2. Two Quarrels
Chapter 3. Ravishing and Romance Language
Chapter 4. The Repertoire of the School for Girls
Chapter 5. Heroines and Local Girls
Chapter 6. Heroines in the World

Pamela L. Cheek is Professor of French and Comparative Literature at the University of New Mexico and author of Sexual Antipodes: Enlightenment Globalization and the Placing of Sex.

[I]t certainly should be read, and because the coverage is remarkable, the book can be profitably read in parts. But to read the whole book has additional rewards, as Cheek interweaves familiar texts with a great many others that few of us have read to illuminate how networks of women writers in the long eighteenth century involved each other in literary projects of female identity. This book opens so many roads of discovery that we will profit from it for a long time.

This is a bold, risk-taking book. It is both theoretically engaged and admirable in scope and aims. In it, Pamela L. Cheek attempts a transnational history of women’s writing in the long eighteenth century. She asks an important question: Where
does 'women’s writing' fit within the category of 'world literature'?...Heroines and Local Girls will remain an important touchstone for us all in the coming years, as we continue to explore writers across borders and write our literary histories anew.

"With her heroines and local girls, Pamela L. Cheek draws attention to two ways in which women could be textually related to the literary field in the long eighteenth century: by defining an aristocratic and cosmopolitan concept of gender identity oneself or, on the other hand, by being determined through a local experience of gender practice. This double definition actually enables Cheek to unfold a new map of literary history, making it possible for today's readers to see ‘women's literature’ at work as a vital critical category, but inviting us all along, also, to articulate its meaning for the women writers themselves in their own century. Cheek's argument is very compelling and makes us look at a number of well-known texts with fresh eyes. Her comparative reading of Charlotte Lennox with Françoise de Graffigny and that of Frances Burney with Mme de Staël are particularly stunning."—Women’s Writing

"Pamela L. Cheek makes an extraordinarily important contribution not just to our understanding of women's writing but also to our thinking about the international circulation and reception of literary texts. Few scholars have anything like Cheek's range, and her ability to speak of the importance of translation without converting it into an easy alignment of one national dictionary with another marks her book with a combination of availability and precision. Heroines and Local Girls is indispensable reading for anyone interested in women's writing and how literature crosses national boundaries."—Frances Ferguson, University of Chicago